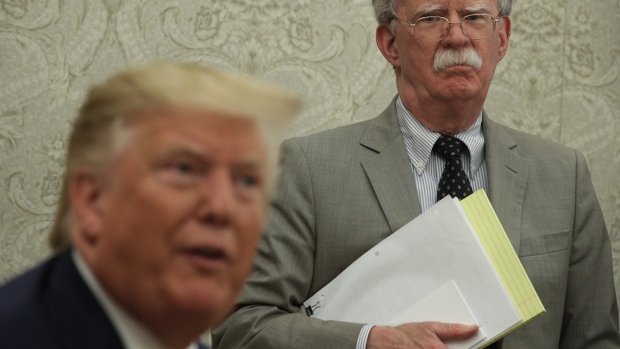 WASHINGTON, DC - AUGUST 20: U.S. President Donald Trump speaks to members of the media as National Security Adviser John Bolton listens during a meeting with President of Romania Klaus Iohannis in the Oval Office of the White House August 20, 2019 in Washington, DC. This is Iohannis’ second visit to the Trump White House and the two leaders are expected to discuss bilateral issues during their meeting. (Photo by Alex Wong/Getty Images) , Photographer: Alex Wong/Getty Images North America

(Bloomberg Opinion) -- John Bolton deserves a defense from two related complaints being made since his departure from the job of national security adviser. The first is that he sought to push policy in the direction he favored, rather than implementing the president’s will. The second is that, rather than being an honest broker helping the various parts of the national-security bureaucracy present options and arguments for the president to assess, he was an advocate for his own views. Neither criticism grapples with the difficulty of applying normal criteria for executive-branch officeholders to this unusual administration.

The first criticism, that he was his own man rather than the president’s, takes it as a given that President Donald Trump is serious about winding down U.S. commitments overseas and not undertaking new ones. If that were the case, then he would not have hired the generally hawkish Bolton to begin with. (Or former Defense Secretary Jim Mattis, or Bolton’s predecessor, H.R. McMaster, or …)

Bolton was a forceful advocate for his hawkish positions on Fox News, and Trump reportedly chose him for the job in large part because of it. Trump has run an administration that does not place great emphasis on everyone’s being on the same page. For Bolton to have set aside his own well-defined views in deference to Trump’s inchoate ones would have required him to overrule Trump’s implicit judgment about the kind of administration he wants.

Second, the notion that Bolton should have provided a smooth process of interagency deliberation assumes that this would have been a useful exercise under Trump. But the president is profoundly uninterested in formulating policy that way. Our evidence for that conclusion is not just the hiring of Bolton but also every report that has been made about this administration.

Under the circumstances, it was reasonable for Bolton to take his job to be to figure out the best foreign policy the country could have and then nudge, cajole and maneuver everyone else in the administration toward it.

But perhaps he too, like his critics, should have adjusted those views in light of this unusual presidency. Bolton reportedly wanted a tougher line on the North Korean regime, and a military response to Iranian provocations. In any administration, it would be crucial to weigh the pros and cons of these actions, which could lead to major military conflicts.

Consider, though, the portrait of this administration that Bolton’s ouster illuminated. It is a White House with a high degree of turnover and backbiting. The president is impulsive – for example, latching on to the idea of talks with the Taliban at Camp David, then dropping it via tweet, yet remaining furious with those who thought better of it.

He is surrounded by people who fear contradicting him. He has little loyalty to his advisers, and inspires little from them. He cannot be trusted to tell the truth in small matters or large. He sees going on TV to defend the administration as one of the key responsibilities of the national security adviser.

Trump has anti-interventionist instincts. He also strengthens the argument against military intervention: This administration is just about the last one that should be leading the country into a war.

To contact the author of this story: Ramesh Ponnuru at rponnuru@bloomberg.net