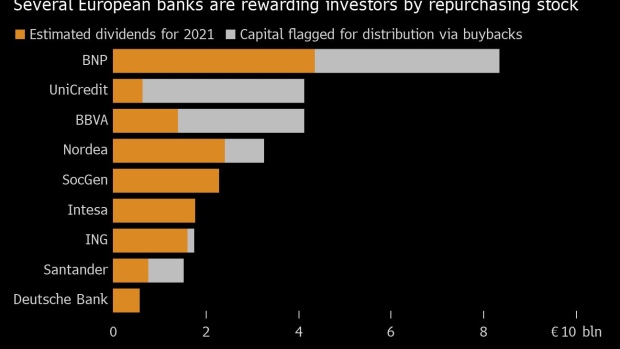 An employee in the Frankfurt Stock Exchange, operated by Deutsche Boerse AG, in Frankfurt, Germany, on Friday, Dec. 10, 2021. Daimler AG’s sprawling trucks division will start trading on Friday in Frankfurt, finalizing a spinoff designed to boost the valuations of the world’s biggest manufacturers of commercial vehicles and luxury cars. Photographer: Alex Kraus/Bloomberg , Bloomberg

(Bloomberg) -- After a dismal decade, European banking stocks are finally on a tear, and bulls say the stars are aligned for further gains.

Lenders are the best-performing industry group this year in the Stoxx Europe 600 Index, up 10%, rising nine straight days to start the year before dropping on Friday. It was the longest winning streak since 2018 and so far the best January start on record.

The catalyst: Expectations for tighter monetary policy from the Federal Reserve and other central banks has caused a surge in bond yields, which helps banks lend more profitably. The economy’s recovery from the pandemic also will lead to more borrowing by businesses and consumers.

“As stock investors have to find out who is benefiting the most from the upcoming central bank measures, it only seems logical to look at banks,” said Andreas Meyer, CEO at Fountain Square Asset Management. “There’s life in those old dogs yet.”

It’s been a long time coming. Bank stocks underperformed the rest of the market for years because of low to negative bond yields, constant regulatory pressure, money-laundering scandals and failed turnarounds. The Stoxx 600 Banks Index slumped 45% in the decade through 2020 while the broader index rose by the same amount.

Investors seemed to have lost all interest in the sector, despite it trading at a record low valuation.

The turnaround kicked off last year, when European banks set aside less cash for bad loans and buoyant financial markets bolstered their trading profits. Now, interest rates are at last marching higher from the rock-bottom levels they’ve been mired in since the financial crisis of 2008-2009.

All 38 stocks in the Stoxx banks index have risen since the end of 2020. Among notable outperformers, Societe Generale SA has doubled, Spain’s Banco de Sabadell SA is up 87% and ING Groep NV is up 77%.

The yield on 10-year German bunds has risen to almost zero from negative 0.5% in August, helping bank stocks in 2021 to their best annual performance since 2009. Every 100-basis-point increase in yields could add about 23 billion euros to bank earnings, estimates Bank of America Corp. analyst Alastair Ryan.

The visibility of shareholder returns has increased since a dividend and share buyback ban from the European Central Bank expired and banks’ asset quality remained solid despite the pandemic. Citigroup Inc. analyst Andrew Coombs estimates that banks could increase their capital returns this year to 81 billion euros, while Bank of America sees a total of 134 billion euros available for distribution until the end of 2023.

Some investors already are scaling back on their bank holdings. Cerberus Capital Management last week sold about 450 million euros of shares in Deutsche Bank AG and Commerzbank AG, reducing the stakes it took in 2017.

And Friday brought a reminder from the U.S. that some parts of banking remain unpredictable. Both Citigroup Inc. and JPMorgan & Chase Co. reported disappointing trading revenue as the favorable capital market conditions of the past two years seem to have faded.

One argument for continued optimism on the sector: Banks’ excess capital and solid balance sheets could act as a catalyst for the long-debated consolidation of the fragmented European banking market. The best bet in that case would be to own shares of so-called national champions, since they will be the ultimate beneficiaries, said Crossbridge Capital Chief Investment Officer Manish Singh.

“Merger activity may heat up,” he said, noting, for example, that French lender BNP Paribas SA will be sitting on a $16 billion “war chest” after selling its U.S. banking unit.