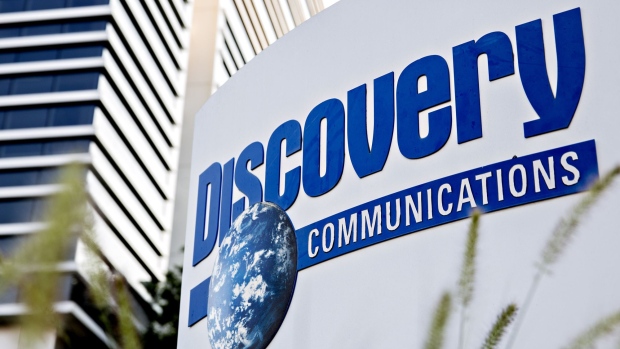 Signage is displayed outside the Discovery Communications Inc. headquarters in Silver Spring, Maryland, U.S., on Thursday, July 20, 2017. Discovery, whose networks include the Discovery Channel, and Viacom Inc. are in talks to combine with Scripps Networks Interactive Inc., owner of HGTV and the Food Network, according to people with knowledge of the matter. Photographer: Andrew Harrer/Bloomberg , Bloomberg

(Bloomberg) -- Discovery Inc. has struck a new long-term deal with Walt Disney Co.’s Hulu, ensuring its channels will continue to be carried on its live-TV service, according to a person familiar with the agreement.

As part of the pact, Discovery will pull back many of its popular shows from Hulu’s separate on-demand service and make them exclusive to Discovery+, its new streaming platform, said the person, who asked not to be identified as the news isn’t yet public. Those titles include “90 Day Fiance” and “Fixer Upper.”

Discovery’s deal shows how media giants are trying to navigate the diverging worlds of cable and streaming. While the cable-TV business is shrinking as subscribers cut the cord, it remains lucrative, and companies need revenue from carriage deals to fund their new streaming services. At the same time, media companies are trying to attract more subscribers to their streaming services by pulling back hit shows they once licensed to rivals.

Hulu offers both an on-demand service, which starts at $5.99 a month, and a cable-TV replacement package that includes dozens of channels for $64.99 a month.

Hulu’s live service will continue to carry all of Discovery’s cable channels, including HGTV, TLC and Food Network, the person said. The Oprah Winfrey Network, known as OWN, will also be available for the first time. Discovery secured rate increases from Hulu for its channels, the person said. Last week, Hulu added ViacomCBS Inc.’s channels, such as Comedy Central, BET and Nickelodeon, to its live service.