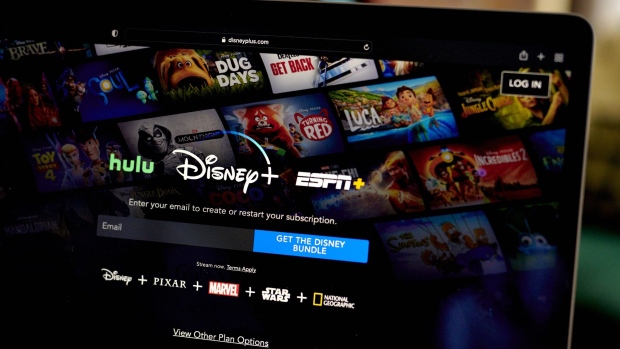 The Disney+ website on a laptop computer in the Brooklyn borough of New York, US, on Monday, July 18, 2022. Walt Disney Co.'s ESPN will raise the price of its streaming service by 43% next month, betting that it can help cover the escalating cost of sports rights without losing subscribers who are grappling with soaring inflation. Photographer: Gabby Jones/Bloomberg , Bloomberg

Iger, who on Nov. 20 resumed the job he’d held for 15 years, said last week in a memo to staff that he’s considering changes in the company’s management structure.

Iger, 71, returned to lead the world’s largest entertainment company with a mandate from the board to renew Disney’s growth. His plans could include changes in the way the company releases and shows movies and TV programs, including the “platforms selected for the initial distribution of content,” Disney said in its 10-K filing Tuesday.

“The restructuring and change in business strategy, once determined, could result in impairment charges,” Disney said.

Disney, like much of the media industry, is grappling with massive changes in how consumers watch movies and TV shows. Viewers are tuning out of traditional broadcast and cable networks in favor of online entertainment. But new streaming services are struggling to turn a profit. Disney lost $4 billion last year in its online TV businesses.

Some of the company’s other channels fared worse, with FX, Freeform and National Geographic losing 3 million subscribers each, according to the company filing. The numbers, from Nielsen, are through Disney’s year end.

The company also said it had paid $900 million this month to acquire the remaining 15% stake of BamTech from Major League Baseball. BamTech, which Disney acquired control of years earlier, provides technology to run streaming businesses such ESPN+.