Walt Disney Co. investors, like its customers, love a good story, and they got one when the entertainment giant reported better-than-expected quarterly results and a surge in streaming customers. 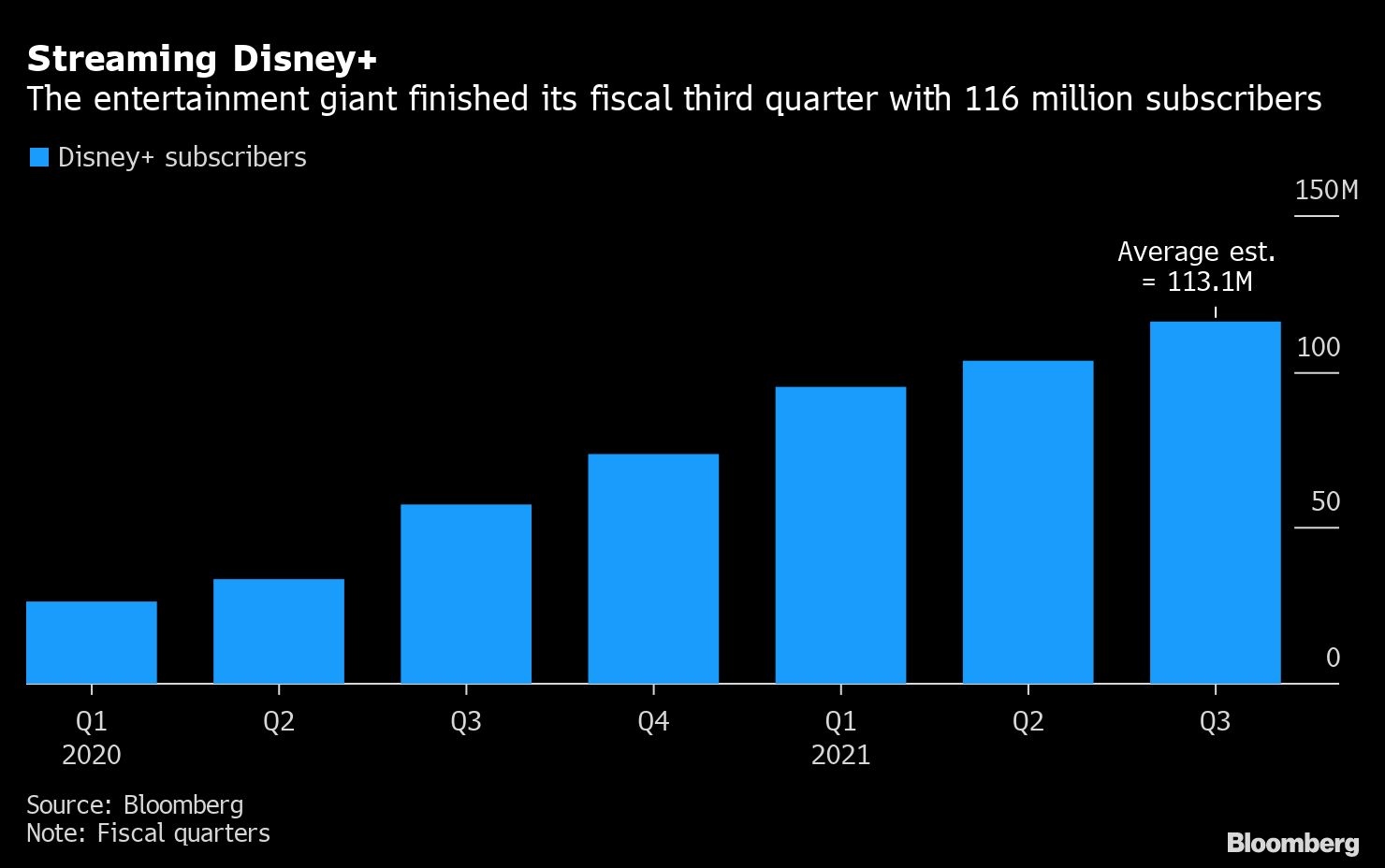 The results show the world’s largest entertainment company is rebounding from the pandemic, which shuttered its resorts around the world, idled its cruise ships and crimped attendance at movie theaters.

Chief Executive Officer Bob Chapek said theme-park reservations are running ahead of the just-ended period, despite the delta variant of COVID-19. Disney expects to be fully staffed at its resorts by year-end, after tens of thousands of layoffs in 2020.

“The fact that you’re seeing bookings as strong as they are is an indication of the core reason you want to own Disney,” said Markus Hansen, a portfolio manager at Vontobel Asset Management Inc.

Disney shares rose as much as 5.9 per cent to US$189.88 in after-market trading. They lost 1 per cent this year through the close Thursday in New York, compared with a 19 per cent gain for the S&P 500.

The company’s direct-to-consumer unit -- the home of its streaming business -- narrowed its loss in the quarter, due to improved results at the Hulu online service. Meanwhile, movies released online, such as “Cruella” and “Luca,” as well as new TV shows from the Marvel superhero factory, drove customers to Disney+.

“The results were really strong, and with lots more content and new market launches, they have so many levers to pull. They’ve won the streaming wars, in my mind.”

Disney’s theme parks, a costly anchor during the pandemic, also beat expectations with operating income of US$356 million, their first profitable quarter since March of last year. All of Disney’s theme parks around the world are open, with attendance and related spending on the upswing. Revenue in that division soared fourfold.

The delta variant may threaten that rebound. COVID-19 has already crimped the theme-park profits by US$1.6 billion over the past nine months. Southwest Airlines Co., the biggest airline serving the theme-park capital of Orlando, Florida, this week reduced its forecast for revenue for the current quarter because the recent surge in cases has cut domestic travel demand.

And the company still has some ground to make up. Fiscal third-quarter sales, while up 45 per cent to US$17 billion, remain more than US$3 billion below the peak of 2019.

However, management had an upbeat take during a conference call with investors. Chapek said Disney cruise ships have resumed service and that future bookings look strong. Spending in the theme parks has increased at a double-digit rate on a per capita basis as new attractions and pent-up demand drive growth.

Disney’s movie business continues to suffer from COVID-19 fallout, with the studio projected to lose money in the current quarter. Profit will also decline in its traditional TV business, hurt by increased programming and marketing expenses for new shows at networks such as ABC and FX. Companywide, the cost of virus-related protections, including those in movie and TV production, will total US$1 billion this fiscal year, Disney said.

Chapek also addressed the legal controversy surrounding movie star Scarlett Johansson, who sued Disney this month claiming she was cheated when the company put her film “Black Widow” on Disney+ at the same time it was released in theaters. Her compensation was tied to box-office receipts.

COVID is creating a lot of anxiety in the business, Chapek said, but the company has evolved its business model many times in the past and the compensation of stars has followed.

“We’ve entered into hundreds of arrangements with our talent and by and large they’ve gone very, very smoothly,” Chapek said.