Walt Disney Co. reached a record high in Wednesday trading after its new video-streaming platform attracted 10 million customers, a blistering pace that reflects the strength of the family-friendly brand in an increasingly crowded market.

The service, Disney+, was just made available Tuesday in the U.S. and Canada, though the company had been offering it earlier in the Netherlands as a test. Rabid fans also have had months to preorder the service at a discounted rate. Still, the 10 million figure surprised analysts, who had expected Disney to take much longer to reach that level.

“Disney should silence naysayers who expressed reservations about a pivot to streaming,” said Geetha Ranganathan, a media analyst for Bloomberg Intelligence. “It took HBO Now about four years to reach about 10 million streaming subscribers.”

The stock climbed as much as 6.8 per cent on Wednesday, shaking off an early decline. That was the biggest intraday rally in seventh months. Netflix Inc. shares fell 3.7 per cent as its company’s investors assess how big a threat Disney+ will be.

Disney also made headway in fixing glitches after a rocky start. Complaints about accessing and watching Disney+ were down sharply in the second day of the U.S. launch, a sign the company is finding its footing. 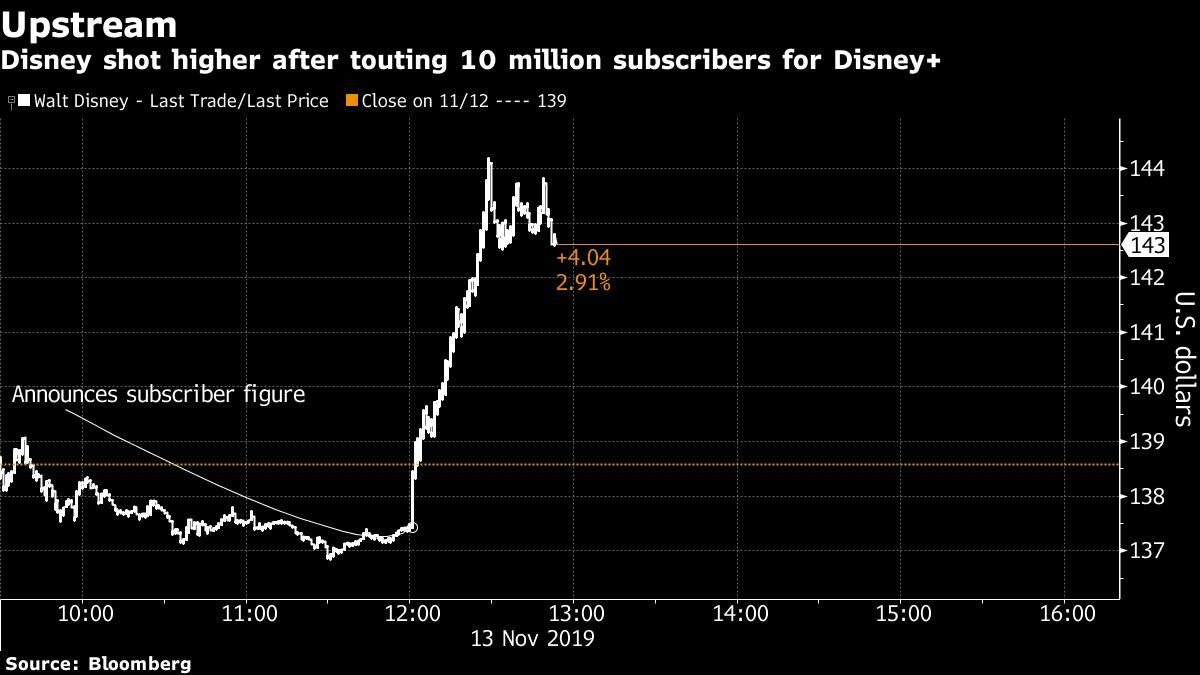 The independent complaint tracker Downdetector was registering about 200 to 500 issues with the service every 15 minutes, a marked decrease from Tuesday morning New York time, when the site saw as many as 8,000 complaints.

Most users who lodged complaints said they were having trouble logging into the site for the first time or getting error messages when they tried to watch a movie or TV show.

The complaint levels on Wednesday were still well ahead of those for rival services such as Netflix, but that company has had years to get its technology right. Disney asked for patience and said it was working hard to fix the issues.

Disney+ is an ambitious attempt to compete with Netflix and other online rivals. The US$7-a-month service includes movies and TV shows from most of the company’s top brands, including Pixar, Marvel and “Star Wars.” Disney is spending US$1 billion in the first year alone on original programming.

The Burbank, California-based company said that in the future it would only be updating subscriber numbers during quarterly investor conference calls.

A marketing agreement with Verizon Communications Inc. gave as many as 19 million of that company’s phone and internet customers one year of the service free. Disney didn’t say how many of the 10 million subscribers came in through the free offer, although the company has said it is getting paid a wholesale rate for that business by Verizon.

An independent tracking firm, Apptopia, had estimated that Disney+ was downloaded 3.2 million times in 24 hours on Apple and Android mobile devices. Many more could have gotten the service through Roku, Amazon Fire, Apple TV and other devices.

The strong initial interest could lead to Disney hitting its target of 60 million to 90 million worldwide subscribers for the new service two years ahead of its original 2024 goal, according to a note from Wedbush Securities analyst Dan Ives. Netflix, meanwhile, could see as many as 10 per cent of its customers lured away to rival services such as Disney+ and one from Apple Inc. that launched earlier this month.

“We believe there is room for consumers to add 1-2 more streaming services onto their entertainment monthly budgets as the cord-cutting theme further takes hold into 2020,” he said.