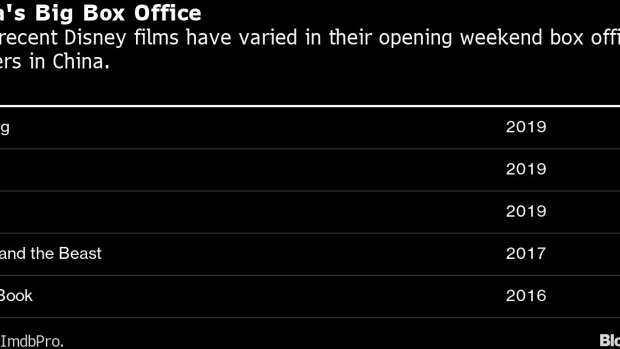 (Bloomberg) -- “Mulan,” the controversial Walt Disney Co. film about a girl who fights as a man to save her father and country, took in a lackluster $23.2 million during its debut in Chinese theaters.

The opening weekend number puts it on the low end of other Disney films in the country and below “Tenet,” the Christopher Nolan spy thriller that generated $30 million in box office receipts in its China debut last weekend. The results bring the film’s total international box office to $37.6 million, Disney said.

The film, a remake of Disney’s 1998 animated hit, once seemed like a sure thing, particularly in China, where story is based on a centuries-old folk ballad. The $200 million production has an all-Asian cast and a female director. But the film was quickly plagued by controversy.

Liu Yifei, the Chinese-American actress who plays the title character, stated her support for the Hong Kong police over pro-democracy protesters last year, prompting a #BoycottMulan movement on Twitter.com.

After its release online in the U.S. and Europe Sept. 4, eagle-eyed viewers noticed that the credits thanked authorities in Xinjiang, a region of China where as many as 1 million of the country’s ethnic Muslim minority are housed in what the government calls “voluntary reeducation centers.”

Those credits prompted another backlash, and on Friday a bipartisan group of U.S. senators sent Disney Chief Executive Officer Bob Chapek a letter asking for answers about the company’s cooperation with the government on the film.

Disney Chief Financial Officer Christine McCarthy said Thursday that the film was predominantly shot in New Zealand, with about 20 other locations in China added to capture the geography of the country. She said its common to thank local authorities who aided in the production in the credits of films.

There may be other reason for the film not to have done well in China. It doesn’t seem to have resonated particularly with young adult filmgoers there who reviewed it poorly online. Since it was released earlier online, pirated copies may also have eaten into theater ticket sales.

About 91% of theaters are open in China, with capacity restricted to half that of normal due to the coronavirus.

“Mulan” was originally scheduled to open in U.S. theaters in March, but its debut was delayed several times due to the coronavirus. Disney opted instead for an unusual strategy, making it available for $30 for subscribers of its Disney+ streaming service. In countries where the service is not available, the company is releasing it in theaters.