Walt Disney Co. Chief Executive Officer Bob Chapek said movie and TV production delays will temper the growth in new streaming customers this quarter, sending the shares to their steepest drop since May.

The executive, speaking at a Goldman Sachs Group Inc. investor conference, said Tuesday the Disney studio has 61 movies and 17 episodic TV shows in production, but the rise of the delta variant of COVID-19 has resulted in some slowdowns. 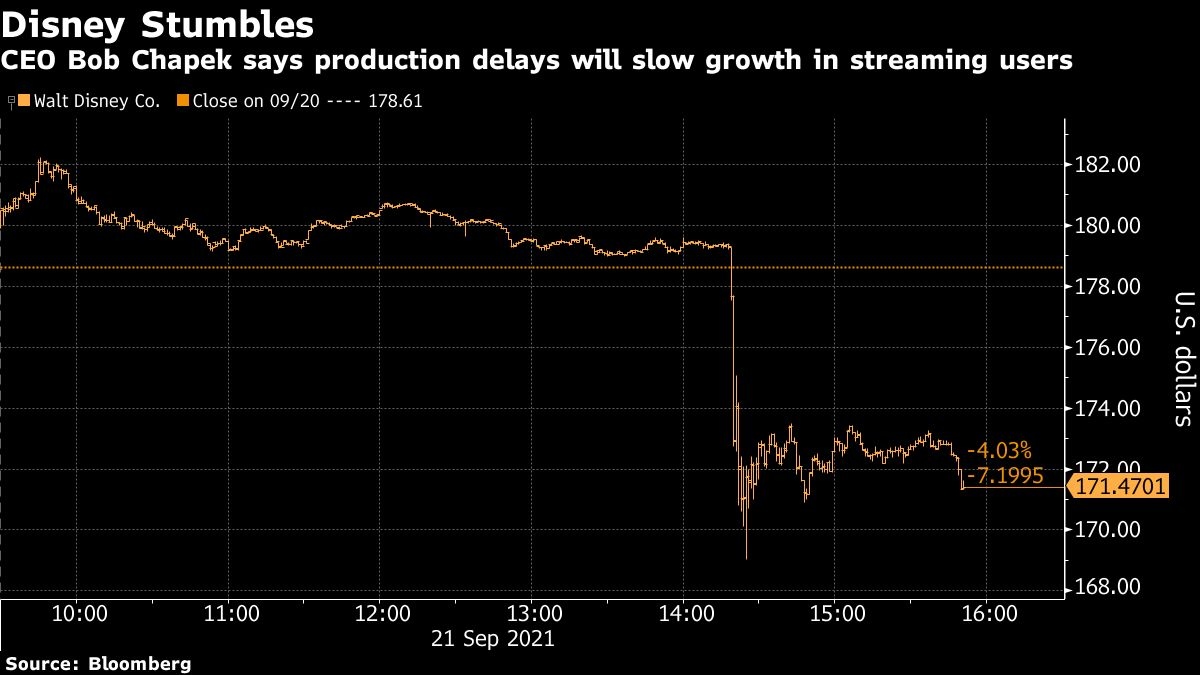 The expiration of subscriber offers in India and a slower-than-expected rollout of a new streaming product in Latin America are also impacting user growth, which Chapek said would be in the “low-single-digit millions of subscribers” for the current period compared with the previous one.

“We’re very bullish and confident about our long-term sub growth,” Chapek said. “But we’re going to see a little bit more noise than I think maybe the Street expects in terms of our ultimate projections quarter-to-quarter.”

Chapek said the introduction of a new Star+ subscription service in Latin America was going slower than the company anticipated, although he believes that numbers will improve as Disney works more closely with distribution partners there.

Disney+, the company’s main streaming service, has been a huge growth engine, particularly with people stuck at home and watching more TV during the pandemic. It now has more than 116 million subscribers globally. Analysts are forecasting about 125.7 million subscribers for the company’s soon-to-end fiscal fourth quarter, based on the average of estimates compiled by Bloomberg.

The company is planning a big promotion for Nov. 12, the two-year anniversary of the streaming service’s launch. Customers will have access to the new Marvel film, “Shang-Chi and the Legend of the Ten Rings,” which was previously only in theaters. “Jungle Cruise,” which was previously available on Disney+ for an additional US$30 fee, will be included in the regular US$8-a-month subscription.

Chapek said theme-park reservations for the quarter remain stronger than the previous one. Disney’s CEO said he’s also looking to be more “aggressive” in terms of the company’s presence in sports betting, including potentially signing additional partnerships for the ESPN brand.