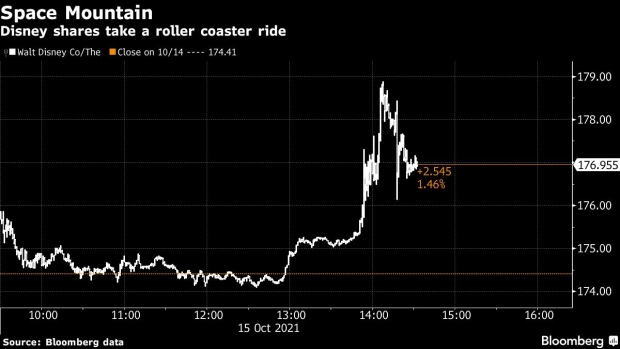 (Bloomberg) -- Walt Disney Co. shares briefly jumped as much as 2.6% after a report by news outlet Puck that the company is considering a spinoff of its ESPN sports networks. The shares gave back some of their gains after a person familiar with the matter denied the report.

Puck said Chief Executive Officer Bob Chapek requested some of his deputies to investigate a separation of the sports channels, with one unidentified source saying “there are now conversations happening regularly at Disney about whether or not to spin off ESPN.” But a person close to the company who declined to speak publicly said the Puck story wasn’t accurate.

The company, like most of the media industry, is in a period of transition with consumer increasingly canceling cable TV and tuning out of regularly scheduled programming in favor of streaming services like Netflix. Disney has built up its own streaming businesses which include Disney+, Hulu and the sports focused ESPN+.