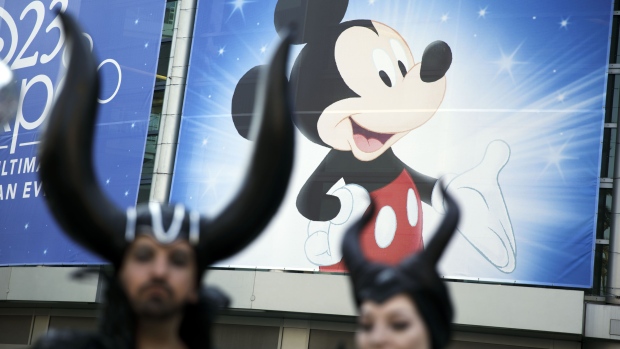 Mickey Mouse signage is displayed outside the D23 Expo 2017 in Anaheim, California, U.S., on Friday, July 14, 2017. Burbank, California-based Disney will entertain D23 guests this weekend with sneak previews of movies as well as the opportunity to purchase exclusive merchandise at dozens of shops situated in the Anaheim Convention Center. Photographer: Patrick T. Fallon/Bloomberg , Bloomberg

Walt Disney Co. is closing its more than two-decade-old Radio Disney network, a casualty of the company’s growing focus on TV and video streaming.

The network, which aired children’s programming, has been operated by the Disney Channel division. About 36 full- and part-time workers were told Thursday of the decision, which takes effect in the first quarter of 2021.

The cuts reflect the sweeping changes Disney has been making to its businesses in the wake of the COVID-19 pandemic and shifts in the way people consume media. Over the past four months, the company has restructured management and reduced headcount. Disney’s ABC News division, for example, is letting fewer than 5 per cent of its 1,400 workers.

Radio Disney was founded in 1996 and was carried by as many as 50 stations nationally. The network helped promote the careers of musicians and Disney stars including Miley Cyrus, Selena Gomez, Demi Lovato and Hilary Duff. The network’s Latin America arm, run separately, won’t be affected by the announcement.

The company also owned some two dozen radio stations, nearly all of which have been sold. The last, KRDC-AM in Los Angeles, will be sold in 2021. The decision also reflects changes in music consumption, with many families subscribing and listening to digital services such as Spotify.

With the coronavirus crushing Disney’s revenue on many fronts, Chief Executive Officer Bob Chapek has shuttered several long-running businesses, including the Disney Channel in the U.K. and a chain of English-language schools the company ran in China.