Walt Disney Co. shares sank the most since the onset of the pandemic after the company reported a smaller-than-expected increase in streaming subscribers, raising concerns that growth is slowing after a meteoric two-year rise.

The shares sank 8.3 per cent to US$159.96 at 9:52 a.m. in New York after earlier dropping as much as 9.2 per cent, the biggest intraday decline since March 2020. The drop brought the company’s market value below that of archrival Netflix Inc. The streaming shortfall was part of a broadly disappointing quarter across the company’s business units.

Disney+ gained 2.1 million customers in the fiscal fourth quarter, the Burbank, California-based company said Wednesday, bringing the total to 118.1 million globally. Analysts were forecasting 119.6 million, the average of estimates compiled by Bloomberg. It was the smallest quarterly gain for the service since its launch two years ago.

Disney has made the family streaming product its major focus for growth in the coming years, and management reiterated its goal of having as many as 260 million customers by 2024. The company is celebrating the second anniversary of the US$8-a-month Disney+ on Nov. 12 by offering new movies and promotions across the Disney empire. 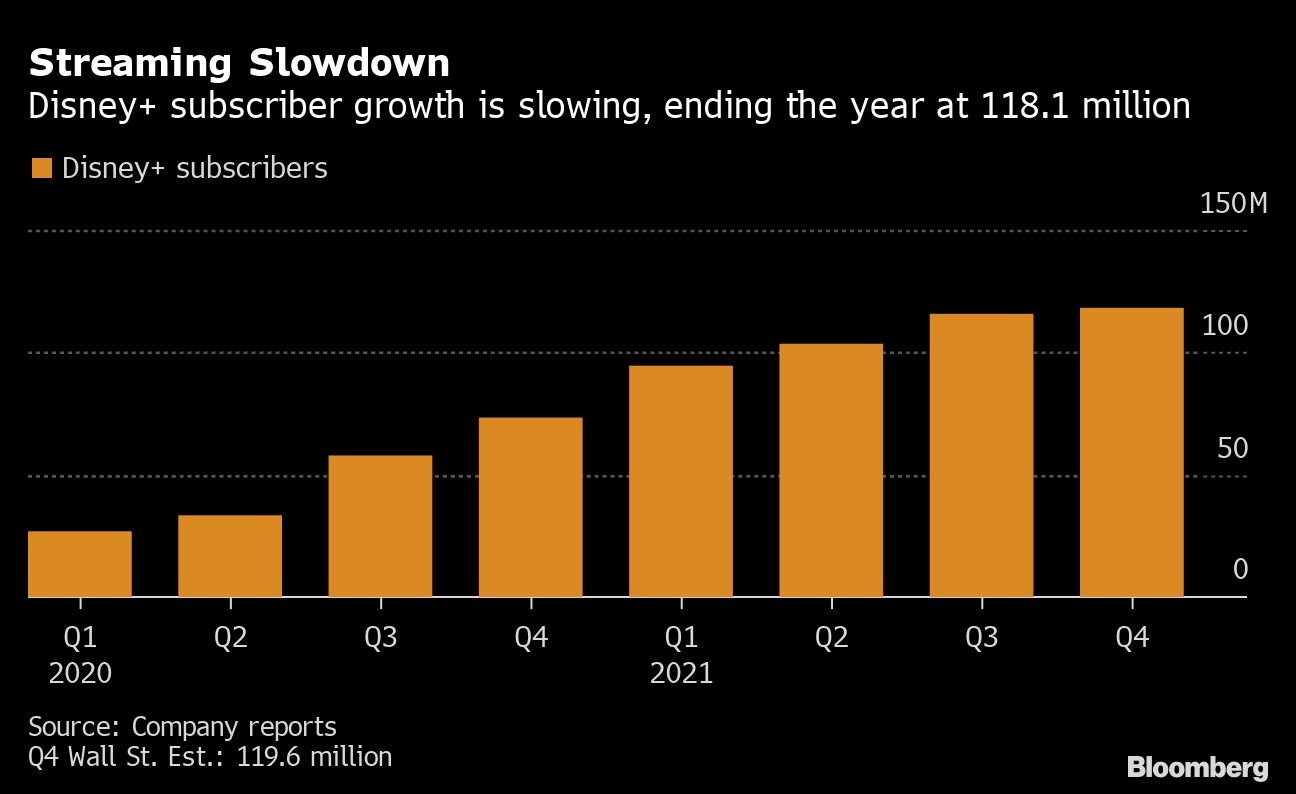 Chief Executive Officer Bob Chapek made it clear on a call with investors Wednesday that the road to that number will be bumpy. Disney+ won’t return to faster subscriber growth until the third and fourth quarters of the current fiscal year.

Growth will be driven first by an increase in the number of countries where Disney+ is offered, and then by what Chapek called a surge of spending on new TV shows and movies. Efforts to produce that programming had been slowed by the pandemic.

“We identified the need for the content way back exactly a year ago and have prepared a very strong cadence of content, which will now hit the pipeline in the second half of this year,” Chapek said.

Investors used to seeing big beats for Disney+ subscribers will have to adjust to this new level of growth, at least in the short run, said Markus Hansen, a portfolio manager at Vontobel Asset Management in New York. “We’ve gotten ahead of ourselves and we’re sort of normalizing,” he said.

Disney reported fourth-quarter earnings of 37 cents a share, excluding some items, missing analysts’ projections of 49 cents. Sales in the period ended Oct. 2 rose to US$18.5 billion, trailing estimates of US$18.8 billion.

Chapek said in September that investors should expect Disney+ subscribers to “increase by low single-digit millions” from the previous quarter. While analysts reduced their estimates, they still expected the service to add 4.9 million customers.

Losses in the direct-to-consumer business, which includes Disney+, widened to US$630 million, the result of heavy spending on TV shows and movies. Wall Street projections were for a loss of US$438.8 million.

In Disney’s traditional TV business, profit fell 11 per cent to US$1.64 billion, due to higher programming and marketing costs for the ABC broadcast network, along with lower affiliate fees from cable networks such as ESPN, which had an extra week in the year-ago period.

The company estimated the additional week boosted pretax income in the prior-year quarter by about US$200 million.

Profit at the company’s theme-park business, the largest in the world, came to US$640 million, compared with a year-earlier loss, largely driven by the consumer products business. That was less than the US$864.4 million analysts had forecast and was the result of international losses and a profit of just US$244 million in the domestic parks.

The Disney film studio posted a loss of US$65 million in the period, compared with a profit a year ago, reflecting marketing costs and other expenses for major releases like “Black Widow” and “Jungle Cruise” that outstripped revenue.

Chapek said he planned to maintain flexibility with the company’s film release strategy, potentially putting movies online far sooner than in the past.

“While COVID will be in the rearview mirror, God willing, I think changing consumer behavior is something that’s going to be more permanent,” he said.