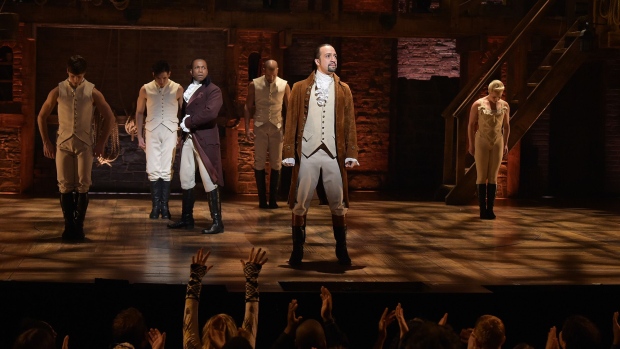 Walt Disney Co. will bring the wildly popular musical “Hamilton” to the big screen next year, and it’s reportedly spending a record amount to do it.

The film will include the original cast of “Hamilton” and be filmed onstage at the Richard Rodgers Theatre in New York, according to a tweet from the musical’s creator and actor Lin-Manuel Miranda. Disney acquired the rights to the Broadway show for US$75 million in one of the biggest-ever film acquisition deals, Deadline reported earlier.

Disney presents:
Hamilton.
With The Original Broadway Cast.
Filmed onstage at The Richard Rodgers Theatre.
In A Theater Near You.
October 15, 2021.#Hamilfilm pic.twitter.com/z4ohfWXzi3

Disney Chief Executive Officer Bob Iger is a big fan of the musical, even quoting lyrics during the company’s annual meeting three years ago. Disney over the years has built up a sizable theater business, including touring productions of shows such as “The Lion King.”

Miranda, meanwhile, has already become a hot property for Disney, contributing to films such as “Moana” and “Mary Poppins Returns.”

In his own tweet, Iger said he was “thrilled” to team up with Miranda.

“Hamilton,” opened on Broadway in August 2015, and became a sensation, selling out performances for months in advance and winning 11 Tony awards. It’s a hip-hop musical based on the biography of Alexander Hamilton, one of America’s founding fathers.

The movie is scheduled to be released Oct. 15, 2021, Miranda said in the tweet. Disney confirmed the release date in its own statement.