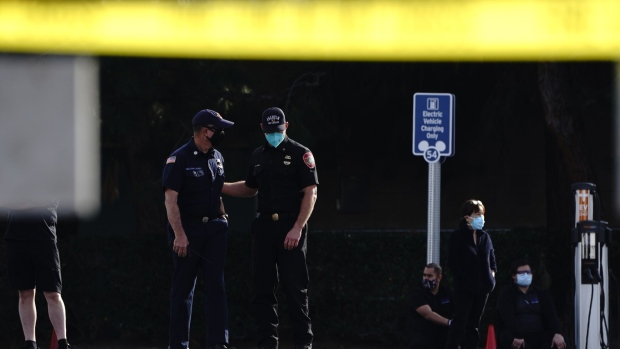 People wait in line at a Covid-19 vaccination site at Disneyland in Anaheim on Jan. 13. , Bloomberg

(Bloomberg) -- Orange County, California, opened a mass-vaccination site at Disneyland Resort in Anaheim on Wednesday, where it expects to inoculate more than 7,000 people a day.

Walt Disney Co. is providing staffing assistance as well as space on its Toy Story parking lot. Some 10,000 people signed up in the first two hours Tuesday, according to Andrew Do, chairman of the county board of supervisors. He asked the county’s 3.2 million residents to be patient. “The server can only handle so many calls and then it crashes,” he said.

Orange County plans to open five such “Super Pod,” or point-of-dispensing, sites. The Disney lot opening comes as California struggles to ramp up Covid-19 vaccinations. The state has administered roughly a third of the vaccines received so far, even as it plans to expand eligibility.

People looking to get vaccinated at the Disney site will need a reservation, and are encouraged to sign up through a website or app. For now, only people in the first tier of eligible residents, such as first responders and health-care workers, are allowed to receive the shot. They’ll park and then walk into a tent for their inoculation.

While California officials said Wednesday they will expand vaccines to anyone 65 and older, Los Angeles County Public Health Director Barbara Ferrer said it may be February before regular residents in that age group can get inoculations. They’re going to sign up more doctors and other providers next week so they can prepare for the vaccination of seniors.

“I know how frustrating it must seem to folks in L.A. county -- we’re not done with our health-care workers,” she said in a news conference Wednesday. “We don’t have enough vaccines. We have hundreds of thousands we need to get through. We’ve asked the state to get us more vaccines.”