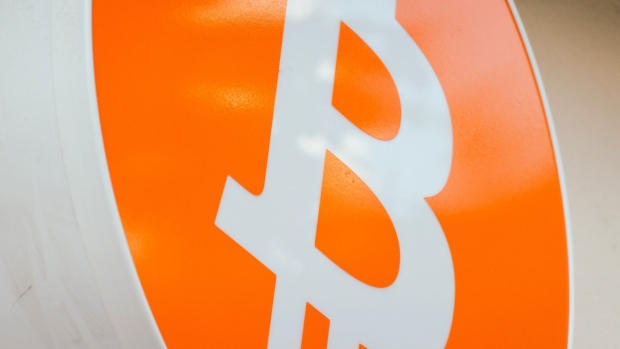 A sign for Bitcoin outside a cryptocurrency automated teller machine (ATM) kiosk in Bucharest, Romania, on Tuesday, May 31, 2022. Cryptocurrencies re-established their tendency to trade in tandem with equities after divergence last week sparked concerns that investors would continue dumping digital tokens even amid a revival in demand for other risk assets. Photographer: Andrei Pungovschi/Bloomberg , Bloomberg

Babel Finance, the distressed crypto lender which froze withdrawals on Friday, said it won a reprieve on debt repayments as it battles to survive a tumultuous slump in cryptocurrency markets.

Hong Kong-based Babel has “reached preliminary agreements on the repayment period of some debts, which has eased the company’s short-term liquidity pressure,” it said in a statement sent to Bloomberg on Monday, without providing details.

Babel is in talks with large institutions about potential solutions that include setting up a new entity to take over some of the debt, a person with knowledge of the matter said, asking not to be identified discussing private information. Babel co-founder Flex Yang didn’t immediately respond to a message sent via LinkedIn seeking comment.

Babel’s difficulties highlight the turmoil sweeping the crypto industry, where at least one more major lender has frozen withdrawals and a prominent hedge fund is trying to stave off collapse. Babel cited “unusual liquidity pressures” for its decision to halt withdrawals.

The person familiar with Babel’s plans didn’t say when the company might open its platform for withdrawals or name the lenders it’s in discussions with.

“Given the current context of severe market volatility, Babel Finance’s management will continue to communicate closely with customers, counterparties, and other partners, and provide updates in a timely and transparent manner,” the company said in the statement.

The halt on withdrawals marked a sudden reversal of fortunes for Sequoia Capital China-backed Babel, which less than a month ago announced an $80 million funding round that put its valuation at $2 billion. The company had an outstanding loan balance of more than $3 billion at the end of last year.

With more than $2 billion wiped off the value of cryptocurrencies since they peaked last year, a wave of liquidations now represents an existential threat to many industry participants.

Celsius Network Ltd., the rival lender that froze deposits earlier in June, on Monday said it needs more time to stabilize its liquidity and operations. “This process will take time,” the company said on its blog. Crypto hedge fund Three Arrows Capital has hired legal and financial advisers after this year’s crypto selloff left it with large losses, its co-founders told the Wall Street Journal last week.