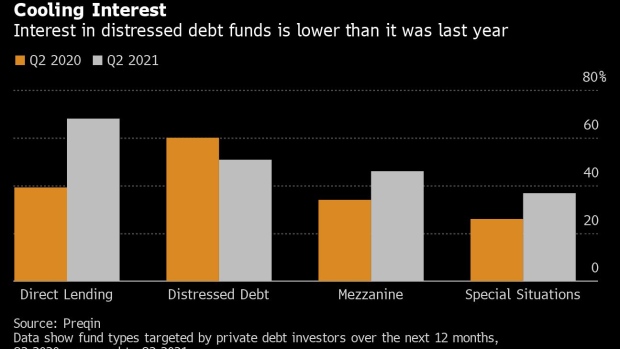 (Bloomberg) -- Private debt investors are turning away from distressed funds amid shrinking opportunities to profit from troubled companies.

Investors were less keen to put their money to work in funds that target distressed credits in the past quarter than a year ago, according to a poll of allocation plans by Preqin. That contrasts with more enthusiasm for other private debt strategies like direct lending and mezzanine funds.

The world of distressed debt is being shrunk out of existence by a pandemic rebound whose ferocity has caught out an industry that thrives on misery. The share of distressed or stressed credits has fallen to a decade low, according to data compiled by analysts at Bloomberg Intelligence, with just 0.5% of Europe’s junk bonds trading at these levels, versus 39% at the peak of the crisis in 2020.

“The extent and amount of distress have so far not lived up to expectations from the early days of the pandemic,” according to Preqin. “Any severe distress, at this point, seems to be in the rear-view mirror.”

Distressed debt funds are already sitting on $15 billion of dry powder. With so much cash lying idle, returns are also coming under pressure.

To be sure, this could all change very quickly. Unprecedented support from European governments and central banks has staved off default and propped up the shakiest companies. As these measures are wound down, fragile corporate balance sheets will be exposed -- and could offer a chance for distressed debt specialists to swoop in.

It’s likely that “fund managers are expecting opportunities when government support ends and more companies declare bankruptcy or require emergency funding,” according to Preqin. “Whether there is sufficient deal flow for funds to deploy the capital they have raised remains to be seen. Many investors and fund managers will wait for the dust of the pandemic-induced fallout to settle, revealing the best opportunities in the asset class.”

Global credit markets have become so subdued that investors are focusing on a more humdrum source of profits: coupons.

Apollo Global Management Inc. is in talks to acquire a portfolio of assets from communications infrastructure specialist Lumen Technologies Inc., according to people with knowledge of the matter.