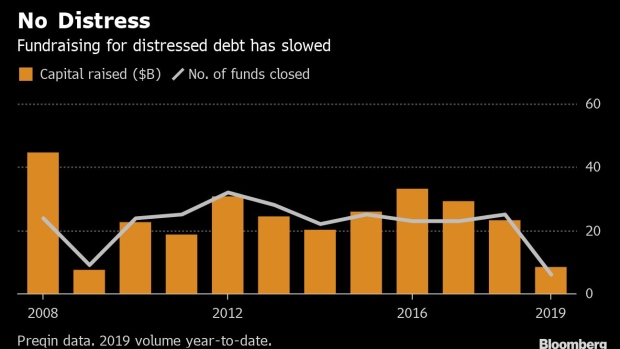 (Bloomberg) -- The hardest part of being a distressed debt investor now may be finding something to do.

Funds that bet on troubled companies have spent years preparing for a creditpocalypse, and have got about $80 billion of cash left to invest, almost enough to buy the entire U.S. market at face value now, according to Preqin and Bloomberg Intelligence. But they have few places to put it to work: While cracks are starting to appear in the U.S. economy, interest rates are low, leaving most corporations in decent shape.

And it’s not clear when distressed debt investors will get busier. The Federal Reserve is moving closer to cutting interest rates. That could mean more cash looking for high yields, propping up weaker borrowers and keeping them from going broke. Corporate bankruptcy filings have been falling since February by one measure.

All this marks a shift from the last few years when firms were expanding their distressed debt staffs in anticipation of an economic downturn. Now, investors including Oaktree Capital Group LLC, Ares Management and Brookfield Asset Management are hungry for new areas to invest their dry powder. They’re sniffing for opportunities in Europe, China, and India, and among smaller U.S. companies.

In some cases, they’re creating distress where there might not have been any otherwise. And they’re raising less money for distressed funds-- just $8.5 billion so far this year, putting 2019 on track to be the slowest for fundraising since 2014.

“The amount of tradeable distressed opportunities is very, very modest,” Jay Wintrob, chief executive officer of Oaktree, lamented at a conference in May regarding investments in the U.S. Oaktree is one of the largest distressed debt managers in the world, with around $20 billion of assets committed to debt from troubled entities. “The U.S. is pretty benign.”

Investors’ difficulties underscore how hard it is to time distressed bets, especially as central banks globally have doused economies with cash at the first signs of trouble. Corporations have taken on ever-larger amounts of debt, with outstanding junk bonds at about $1.25 trillion as of Wednesday, more than double the level a decade ago. Borrowings are higher relative to assets and a measure of earnings.

But when energy and other commodity prices started falling in the middle of this decade, distressed debt firms started looking for opportunities to snatch up assets. In 2015, many suffered big losses as the Fed kept rates low and energy prices kept falling.

This year has also been relatively tough for the debt. With the Federal Reserve suggesting it’s going to expand the money supply and bond prices having broadly jumped, the supply of U.S. distressed debt has dropped about 30% since mid-January, to a market value of around $58 billion, according to Bank of America index data. A Bloomberg index of U.S. corporate bankruptcy filings has fallen about 23% since late February. And while distressed debt has gained more than 4.4% this year through Wednesday, according to Bank of America’s index, that trails the roughly 10% that junk bonds broadly gained over that period, according to Bloomberg Barclays index data.

The supply of distressed debt may also be curtailed by the rise of “covenant lite” lending agreements, which give creditors fewer ways to trigger bankruptcy or other restructurings for companies that are clearly struggling, according to Ben Finestone, a partner at law firm Quinn Emanuel Urquhart & Sullivan. Even if revenue is falling at some companies, lenders have fewer options for forcing restructurings, Finestone said.

“It feels like there’s a lot of distress but the day of reckoning hasn’t come,” he said.

Firms are still getting ready for mass pain among corporate borrowers. York Capital Management is raising around $1 billion for a distressed debt fund, while Angelo Gordon & Co. is slated to raise around $1.5 billion. Most of that money has already been committed to the funds by investors.

Money managers that raised dedicated distressed-debt funds a couple of years ago in anticipation of a recession are feeling the pressure to invest, according to Angelo Rufino, a portfolio manager at Brookfield Asset Management, who helps manage the firm’s special situations and distressed investments. Brookfield has flexibility in its investing mandates to buy a broader array of securities globally, meaning it doesn’t face the same pressures as some dedicated distressed-debt funds, he said.

“We have the ability to invest in hairy jurisdictions and places where others won’t go,” Rufino said, noting Brookfield is building its business in India and China, and is the biggest private investor in Brazil. Brookfield in March agreed to buy a 62% stake in Oaktree.

Another strategy that can work well is to focus on smaller companies, where competition to put capital to work will be less intense, according to Jeanne Manischewitz at York Capital Management. Investors with a lot of cash to invest usually prefer to write bigger checks, she said.

“You have to be very picky right now,” and focus on good companies with bad balance sheets, said Manischewitz, co-head of North American credit.

In some cases, where there’s not enough distress, money managers have looked to create it. Aurelius Capital Management delved deep into the bond agreements for a rural telephone service provider, Windstream Holdings Inc., and said the company had violated those covenants when it spun out wireline network assets to create Uniti Group Inc. It sued Windstream, and won, sending the company into bankruptcy. The investment firm is widely believed to have bought credit default swaps insuring against default, meaning that it profited when the company filed for bankruptcy.

Eventually, the economy will turn, and the supply of distressed debt will rise steeply. The amount of outstanding troubled company debt has a way of growing significantly in a short period of time. And there are incipient signs of stress at U.S. companies and in the economy more broadly. A measure of income for junk-rated companies, known as earnings before interest, taxes, depreciation and amortization, fell in the first quarter. As of the start of July, more than 80% of S&P 500 companies that had revised profit estimates ahead of posting second-quarter earnings had cut their forecasts.

“Bad news for everybody is usually good news for special situations investors,” said Ivelina Green, portfolio manager in London at CQS, a hedge fund that has around $18 billion of assets.

For now, without much distressed-debt supply, investors are keen to provide financing to companies that are faltering but not yet near death, to give themselves a seat at the table in advance of a big restructuring, said Paul Basta, co-chair of the restructuring practice at Paul, Weiss, Rifkind, Wharton & Garrison. A money manager that lends earlier to a troubled company can be better positioned to maximize returns when the company reorganizes, he said.

“Investors are itching for stuff to do,” Basta said.

To contact the editors responsible for this story: Rick Green at rgreen18@bloomberg.net, Dan Wilchins, Nicole Bullock