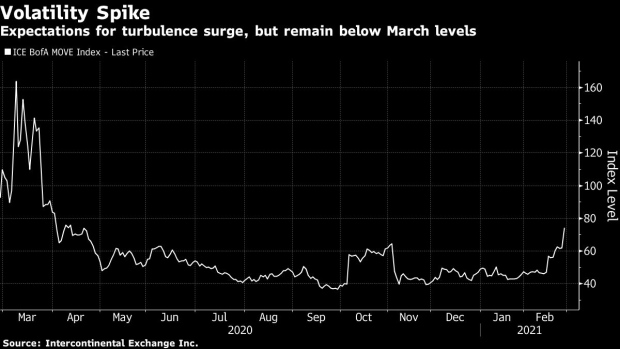 (Bloomberg) -- The past week’s tumult in the $21 trillion Treasuries market has left shell-shocked traders positioned for even more losses ahead -- raising pressure on Federal Reserve officials to respond to the startling run-up in yields.

Momentum traders were, as of Thursday’s close, the most short on Treasuries since the 2013 taper tantrum episode, according to Jefferies International. Meanwhile, expected volatility is surging, a warning flag across asset classes, and the market is moving toward pricing in a Fed liftoff from near zero in late 2022, at least a full year earlier than the central bank has signaled. That’s the backdrop in which Fed Chairman Jerome Powell will deliver what are likely his final public comments before a mid-month policy meeting. A bevy of other officials are set to speak before he takes center stage later next week.

They’re appearing after a stretch that produced a dizzying list of superlatives, including the steepest weekly jump in five-year yields in months and the biggest convulsions in the yield curve since the early days of the pandemic. What’s more, 10-year yields, a benchmark for global borrowing, soared to the highest level in a year. While they wound up retreating sharply on month-end buying, the initial move helped quell the speculative euphoria that’s supported risky assets. Put it all together, and the coming Fed remarks loom large for all markets, not just bond traders betting on higher yields.

“There are two risks heading into next week,” says Gennadiy Goldberg, a senior U.S. rates strategist at TD Securities. “Fed officials could simply stick to their script and suggest that the move higher in rates occurred only for good reasons. This would reward those investors positioned for shorts.”

Alternatively, he says, policy makers “could acknowledge that they are somewhat concerned by the market’s pulling forward of rate-hike expectations, reiterate their patient stance, and suggest that too rapid a rise in rates could tighten financial conditions” -- all of which would benefit investors looking to lean against the jump in yields.

Ten-year Treasuries ended the week at 1.4%, well below their peak of 1.61% reached Thursday, the highest since February 2020. The most brutal part of that leap came after demand cratered at the Treasury’s 7-year note auction. The bloodletting that ensued, led by the 5-year note, squeezed bets on steepener trades and other positions involving that part of the curve.

In Treasury options, the skew of puts to calls is its most extreme since 2012, indicating traders are still positioned for higher yields -- and convexity shocks remain a threat. With traders embracing a rosier view of the economy amid the rollout of vaccines and calls for additional U.S. virus relief, the swaps market is now pricing the Fed’s first hike closer to December 2022, versus mid-2023 at the start of the week. The Fed itself has signaled no tightening through 2023.

Another issue adding to the market’s jitters is the looming March 31 expiration of pandemic-era regulatory exemptions that allow banks to buy more bonds. In testimony this week, Powell said the Fed is evaluating what to do about the relief.

In a big reversal from a neutral stance just three weeks ago, momentum investors still have ammo to fuel a fresh leg in the bond selloff, according to Jefferies.

“It’s the most short since the taper tantrum of 2013, but is still not at an extreme, suggesting that momentum players have more room to add,” said Mohit Kumar, a strategist at Jefferies. “But at this level, any move up in yields is unlikely to be at the same pace or magnitude that the market has seen this week.”

The bond bears do have some important figures ahead to focus on. Friday will bring February jobs data, with the median estimate calling for a 171,000 gain in nonfarm payrolls, a rebound from January. Any signs the labor market is failing to recover could roil reflation bets.

For Thomas Pluta, global head of linear rates trading at JPMorgan Chase & Co., yields could continue to nudge higher next week and beyond. However, he doesn’t expect the Fed to push back against the climb by adjusting its bond purchases or duration of its Treasuries holdings, at least for now.

Further turbulence is possible, says Jamie Anderson, head of U.S. trading for Insight Investment, amid a large amount of “crosscurrents that are pushing different parts of the rates market.”

For next week, the risk is “continued high realized volatility” as any Fed comments on steps to support Treasuries would result in short positions getting squeezed. If the topic isn’t addressed, that may spur selling in anticipation of auctions the following week.

There’s at least one other topic traders will be on alert for next week. With a deluge of cash in funding markets pushing front-end rates to zero, there’s the prospect the Fed may have to tinker with the interest rate it pays on excess reserves -- known as IOER -- one of the tools it uses to control its policy target.