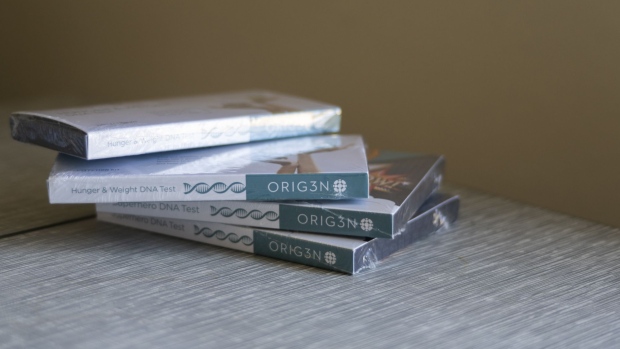 (Bloomberg) -- Botched Covid-19 tests from a single Massachusetts laboratory led to about 300 flawed and misleading results at nursing homes across the state, a casualty of the nationwide rush to get diagnostics to the public after initial attempts to supply them went awry.

The spate of false results from Orig3n Inc., a consumer DNA-testing company that pivoted to coronavirus detection during the pandemic, cost some nursing homes tens of thousands of dollars, reduced levels of available staff and sent panic rippling through employees and residents. After the erroneous results came to light, Orig3n was told by Massachusetts health officials to suspend testing Aug. 8, according to a person familiar with the matter.

The episode “sowed fear throughout the whole organization,” said Ted Owens, chief executive officer of North Hill Communities Inc., a skilled-nursing facility operator that saw 18 employees and one resident receive false-positive results. “And in the end it just turned out to be a fire drill.”

Incorrect test results can arise for a variety of reasons, including sample contamination, pressure to process tests quickly and lack of vetting and validation. What was unusual about Orig3n’s case, said Davey Smith, head of the Division of Infectious Diseases and Global Public Health at the University of California, San Diego, was that it didn’t catch the surge in positives itself before sending out results.

“They didn’t have their own quality control procedures in place,” he said.

Orig3n said it identified Covid-19 false positive results on Aug. 1, according to an email from Chief Executive Officer Robin Smith. The company then told clients and suspended Covid-19 testing at its Boston lab on Aug. 8, according to the email. Affected samples were retested internally and at an external reference lab, Smith said, and the results were communicated to clients.

“We understand the critical importance of speed and precision in Covid-19 testing, and we’re committed to providing accurate, timely results for our clients,” Smith said in the emailed statement. “We’ve processed tens of thousands of Covid-19 tests over the past 90 days on behalf of our clients, which include schools, nursing homes, private and public employers.”

Orig3n said it has put a plan in place to prevent future incidents and is working with the state toward resuming testing in its Boston lab.

Six months into a pandemic response effort hamstrung by shortages and delays, the incident demonstrates the high cost of insufficient testing infrastructure. Nursing homes account for more than 50,000 U.S. coronavirus deaths, more than a third of the national reported total. In July, when Massachusetts began requiring long-term care facilities to test residents and staff, they were sent scrambling to find vendors that could handle large volumes. Orig3n was one of those the state recommended.

To fill the nationwide testing gap, many companies abruptly retooled to offer diagnostics. Orig3n received emergency FDA authorization for its Covid-19 test in April. Clearance relies on data from the test manufacturer, rather than a direct assessment of facilities by agency officials.

At the time, Orig3n was a relative newcomer to infectious-disease testing:  The company was best known for DNA tests derided by some experts as pseudoscientific. One purports to reveal whether a person might be more likely to possess “unique superhero traits,” such as unusually high intelligence or physical strength. Others help consumers choose foods, exercise regimens and beauty products to fit their genetic profile.

Orig3n had already been under scrutiny in the past. In 2018, an investigation into home DNA tests by NBC Chicago that found the company mistakenly processed a dog’s DNA,  failing to recognize it wasn’t human; other test-kit makers reported that the dog DNA samples were unreadable. The issue prompted a survey of the lab by the Centers for Medicare & Medicaid Services, which later reported the company had implemented new quality assessment methods.

But one year ago, Bloomberg Businessweek reported allegations from 17 former employees claiming persistent issues at Orig3n including inaccurate tests, sample contamination, sloppy lab practices and tampering with results.  At the time, the company said that the former employees were disgruntled, their accounts were “grossly inaccurate”  and the company has issued corrections to inaccurate tests. Orig3n didn't comment further on the incident when reached for this story.

North Hill received test results from Orig3n on Aug. 3. Immediately, Chief Executive Officer Ted Owens isolated the positive resident and sent the staffers home, put visits on hold, and sent a letter out to residents and their family members.

“We caused a bit of hysteria,” he said.

Orig3n’s retesting of the samples all came back negative, and another round at the Broad Institute of MIT and Harvard confirmed those results. The false alarm cost North Hill at least $20,000 in employee overtime and other costs, but the reputational harm may cost the home more in lost potential residents, Owens said.

“Unfortunately by the time the true result was known the damage had all been done,” he said.

Orig3n also did pop-up testing events in North Carolina, according to the state’s health department. Officials said they halted their use of the laboratory after the Massachusetts issues came to light. Orig3n said it wasn’t aware of testing problems in states outside Massachusetts.

Nursing home operators in Massachusetts said they were unaware of the company’s main business in selling personalized vitamins and lifestyle genetic tests. “A single positive Covid test result of a nursing facility staff member has an enormous impact on a facility’s clinical operations,” said Tara Gregorio, president of the Massachusetts Senior Care Association. At least 11 facilities received false positive tests from Orig3n, according to the industry group.

Jen Kaliff said she was one of 13 employees at Southpointe Rehab and Skilled Nursing in Fall River who received false positive results in early August. In the five days before her negative status was confirmed, the error set off a ripple effect.

Her husband, a school principal, had to disclose his wife’s result to his colleagues. She worried she had infected her pregnant daughter and two grandchildren.  As one of two social workers on staff at Southpointe, she said her absence created a strain.

“If you work in a nursing home, you’re already like a leper,” because of the heightened risk of infection, she said. “I had been so careful. I thought that if I got it, there is really no hope for anyone else.”

An Aug. 17 email from the Massachusetts Department of Public Health to nursing homes that was shared with Bloomberg said that after the flawed tests, Orig3n “has suspended all Covid-19 testing,” and its samples were being retested. The lab reported the errors resulted from either a broken vial or contaminated plate involved in test processing, the health department said, but that conclusion could change, and more false results could be discovered in the ongoing investigation.  The company said its mistaken tests were a result of “human error.”

Other companies have experienced problems with new Covid-19 tests. Last month, the Food and Drug Administration issued a notice about inaccurate results with a widely used Covid-19 diagnostic made by Thermo Fisher Scientific Inc. The company told the Associated Press at the time that it was working with lab personnel to ensure strict adherence for instructions for use. The National Football League was also briefly sent into a frenzy when 77 players received false-positive tests processed at a lab in New Jersey. The lab said the samples were contaminated.

Jennifer Nuzzo, an epidemiologist at the Johns Hopkins Center for Health Security, said the number of Orig3n’s false positives was “deeply troubling,’’ and the frequency of  stories about incorrect results throughout the industry points to a need to rethink regulation.

“We haven’t really figured out how to have the appropriate level of oversight,” she said.  “We need more testing and need also for those tests to be more dependable.”