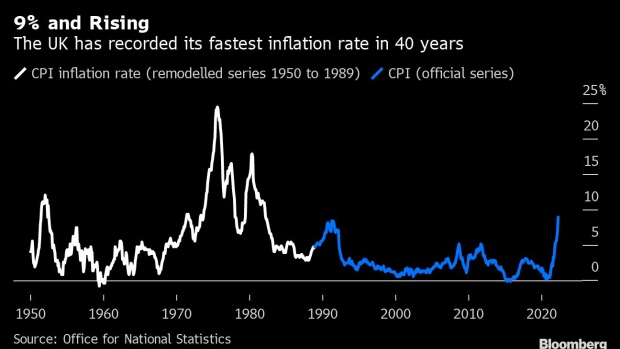 GARMISCH-PARTENKIRCHEN, GERMANY - JUNE 28: Britain's Prime Minister Boris Johnson arrives for a 'quad' meeting at the G7 summit at Elmau Castle on June 28, 2022 near Garmisch-Partenkirchen, Germany. Leaders of the G7 group of nations are officially coming together under the motto: "progress towards an equitable world" and will discuss global issues including war, climate change, hunger, poverty and health. Overshadowing this year's summit is the ongoing Russian war in Ukraine. (Photo by Stefan Rousseau - Pool/Getty Images) , Photographer: Pool/Getty Images Europe

(Bloomberg) -- Boris Johnson has spent much of the past week focused on overseas crises. At home, signs of disarray are building in his absence.

With inflation soaring, Britain’s doctors are the latest to threaten strike action over pay. Labor disruption is also looming from teachers to postal workers, after the largest rail strike in three decades brought much of the country to a standstill last week. Even trial lawyers are walking out.

For the prime minister, who is due to return late Thursday from a trip to Commonwealth, Group of Seven and NATO summits, a summer of discontent fueled by faltering public services and a dramatic squeeze on living standards poses considerable peril.

Johnson is just weeks removed from a Conservative Party confidence vote that almost ended his premiership -- more than 40% of Tory MPs turned against him. The repercussions of that are still playing out, and influencing how he responds to the cost-of-living crisis.

The government is strongly resisting calls from the public sector for pay increases to match inflation, which is already at 9% and predicted by the central bank to exceed 11% in October. It argues that raising salaries in line with those numbers would fuel further price increases.

“If we have a series of across-the-board pay increases for everybody, then what is going to happen is that is just going to see even more inflation,” minister Chris Philp told Sky News. There are no “easy fixes,” he said.

It’s the type of approach that plays well with the right-wing caucus in the Conservative Party, which still admires the labor union-busting exploits of former leader Margaret Thatcher. Those are also the MPs where Johnson has focused on bolstering his support since the confidence vote.

But it’s a risky strategy. Even Johnson has acknowledged the economic crisis is costing Tories vote, blaming it for the loss of two Parliament seats in separate elections last week that have further undermined his leadership.

The problem for the government is that polls show voters are in many cases sympathetic to public sector calls for more pay. Memories of the pandemic lockdowns still run strong, during which key workers were lauded for their efforts in keeping the country running in difficult conditions.

More sectors are joining in. Delegates at the British Medical Association’s annual meeting voted on Monday to push for a pay rise of at least 30% over the next five years, arguing that would only make up for their cut in salaries since 2008 when measured against inflation.

Criminal trial lawyers walked out on Monday in a long-running spat over government funding and fees that have collapsed in recent years. Post Office staff will strike one day next month over wages, after the Communications Workers Union called an offer of a 3% raise and one-off payment of £500 ($613) for employees “woefully inadequate.”

The general secretary of the Fire Brigades Union said firefighters may strike over a 2% pay offer.

With Britons facing the worst squeeze on living standards since the 1950s, Chancellor of the Exchequer Rishi Sunak last month announced £15 billion of further support to help households cope with energy costs that increased by 54% in April. Prices are set to surge further in October when the regulator carries out its twice-yearly adjustment of a cap on gas and power bills.

Pay for many public sector workers, including teachers, police and National Health Service staff, is set by the government. Ministers take heed of advice of independent pay review bodies, which give their recommendations in the coming weeks, though they are not obliged to follow it.

They must, however, give a reason if they don’t.