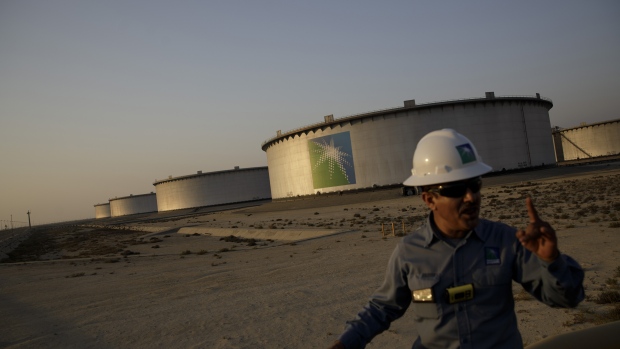 An employee walks past crude oil storage tanks at the Juaymah Tank Farm in Saudi Aramco's Ras Tanura oil refinery and oil terminal in Ras Tanura, Saudi Arabia, on Monday, Oct. 1, 2018. Saudi Arabia is seeking to transform its crude-dependent economy by developing new industries, and is pushing into petrochemicals as a way to earn more from its energy deposits. , Bloomberg

(Bloomberg Opinion) -- The world’s system of emergency oil stockpiles has been tested just a handful of times over the years. If needed it can probably cope with the aftermath of Saturday’s attack on Saudi Arabia’s oil processing plant at Abqaiq. Any further such disruptions, should conflict broaden in the Persian Gulf, might be less easy to accommodate.

Executives at Saudi Aramco, the state-owned oil company, have indicated that they could restore a “significant” volume of the shuttered daily production of 5.7 million barrels of crude in a matter of days. But it will take weeks to get back to full capacity, according to Bloomberg News.

If production can’t be brought back quickly enough, the world can draw on crude and refined products stashed away in government-controlled stockpiles for just such an emergency. President Donald Trump has authorized the release of oil from the U.S. Strategic Petroleum Reserve, and the International Energy Agency — which coordinates stockpiles — is standing by.

Just a few days ago oil ministers from OPEC and its big oil-producing counterparts (known collectively as OPEC+) were bemoaning the excessive inventories still sloshing around the world after more than two and a half years of supply restrictions. 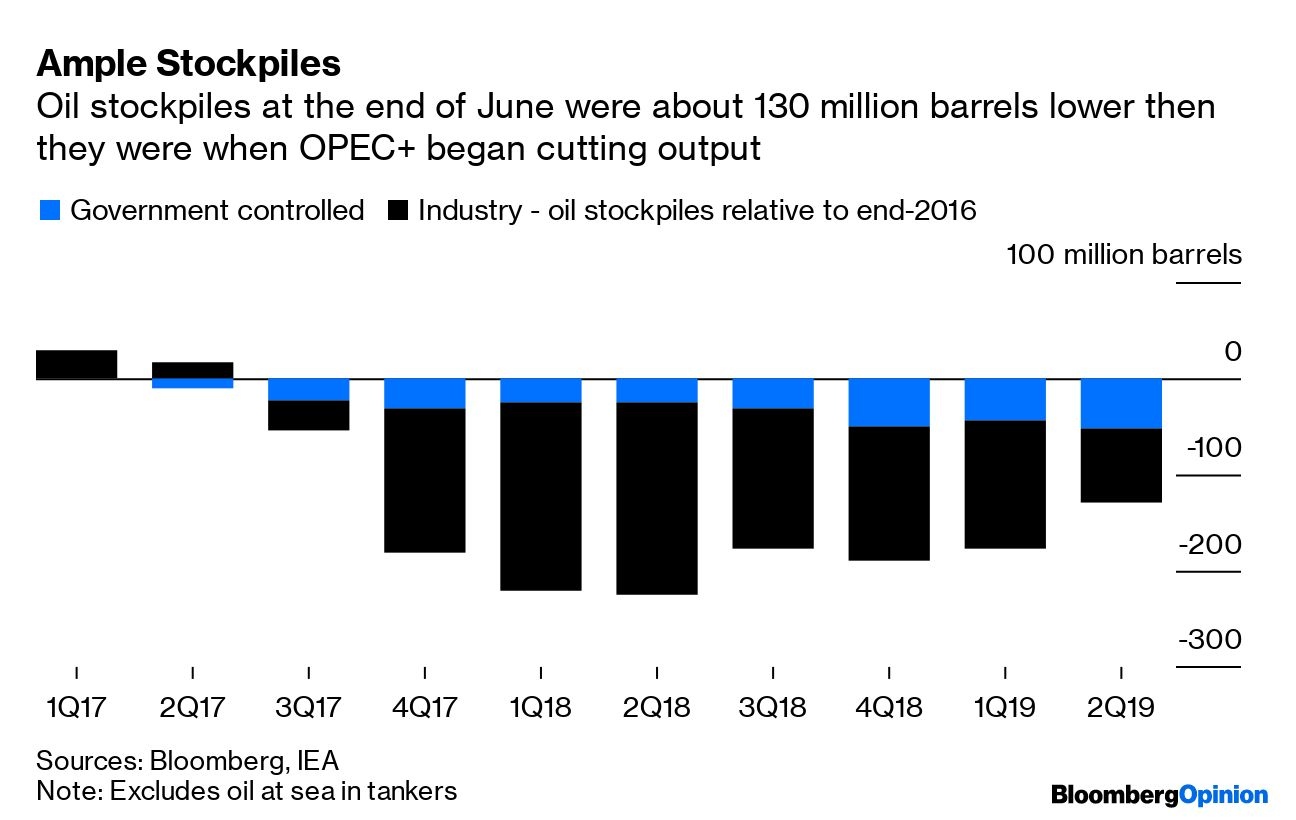 Saturday’s sudden disappearance of millions of barrels of Saudi crude production led to the biggest spike in Brent futures since they were launched, with the price increase settling at more than 10 per cent on Monday morning. Yet this wasn’t the way OPEC+ wanted to see inventories drained — or the crude price lifted. Suddenly the question is whether the world has enough oil, not too much.

Excess supplies were being whittled away steadily during the first year and a half of the OPEC+ output restrictions, falling by as much as 226 million barrels by the end of June 2018, but they stabilized subsequently and began rising again.

Total commercial and government-controlled oil inventories in the member countries of the OECD stood at 4.48 billion barrels at the end of June 2019, according to the IEA, enough to meet 92 days’ worth of the group’s consumption. There are also significant strategic stockpiles outside the OECD, notably in China.

Of that OECD total, the IEA says commercial stocks are sufficient to meet projected demand for 60 days. That figure is misleading, though. It includes oil in pipelines and refineries, which may account for as much as two-thirds of the total industry figure, but it doesn’t include the volume at sea on tankers. If Aramco’s executives are right about how quickly they’ll get Abqaiq back online, 20 days of demand should provide enough cover. If they’re wrong, we’re going to have to look to those emergency stocks controlled by governments.

Saturday’s attack and production shutdown is exactly what the emergency national stocks were designed for: A major disruption to global oil flows. Fortunately, they’ve seldom been called upon. There have been only three coordinated releases of strategic stockpiles since the IEA was formed in 1974.

The most recent was in 2011 when about 60 million barrels of crude and products were made available to offset the loss of Libyan oil production. Before that a similar amount was offered after Hurricanes Katrina and Rita tore through the Gulf of Mexico in 2005, although not all of it was taken up. The biggest release happened after Iraq invaded Kuwait in 1990, when the IEA made 2.5 million barrels a day available in January the following year.

The rate at which oil can be withdrawn from emergency stockpiles is more than adequate to cover the loss of five million barrels a day of Saudi supplies for at least three months. After that things get a bit tighter.

Still, the full burden won’t fall on those emergency reserves. The kingdom itself has spare production capacity that it will tap to offset as much of the loss as it can. Output will be increased where possible at Saudi’s offshore fields in the Persian Gulf whose crude doesn’t pass through Abqaiq, such as Manifa and Safaniyah, although some of that could take weeks to bring on line. The restart of the Wafra and Khafji fields in the Neutral Zone that Saudi Arabia shares with Kuwait may also find new momentum suddenly.

Other members of the OPEC+ group who have cut production will reopen the taps. Well, most of them. Iraq’s export reduction, ordered Saturday before the attacks were known about, could be the shortest in history. Iran’s oil exports, however, will remain under U.S. sanctions that might get even tougher now that Secretary of State Mike Pompeo has blamed Tehran for the Abqaiq attack.

There’s a chance that we’ll avoid tapping the emergency stockpiles this time. But with the Saudis’ vulnerability just laid bare by Saturday’s strikes they may well be tested soon.