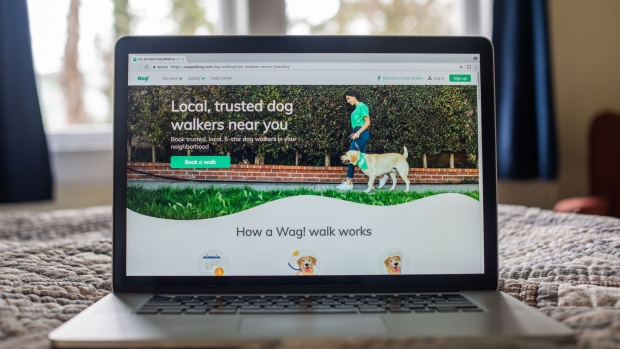 The Wag Labs Inc. website on a laptop computer arranged in Dobbs Ferry, New York, U.S., Thursday, April 1, 2021. One of the signs that Covid-19's hold over Americans' lives is easing is that pet owners are now spending a little less time with their animals. As a result, two of the most popular apps for booking dog walkers or pet sitters say they're seeing the highest demand since the pandemic started a year ago. , Bloomberg

(Bloomberg) -- Dog-walking startup Wag Labs Inc. is in talks to go public through a merger with CHW Acquisition Corp., according to people with knowledge of the matter.

The special purpose acquisition company is in discussions to raise funds for a private investment in public equity, or PIPE, to support the transaction with Wag. The combined entity is set to have an enterprise value of about $350 million, the people said, declining to be named discussing private information. The transaction value is based on a multiple of projected revenue of about $42 million in 2022 and $71 million in 2023. Terms aren’t finalized and it’s possible talks could collapse.

Representatives for Wag didn’t immediately respond to a request for comment. A CHW representative declined to comment.

CHW, the blank-check firm, is led by President Paul Norman, a former Kellogg Co. executive and co-Chief Executive Officers Jonah Raskas and Mark Grundman. It raised $125 million in an August initial public offering, and has said it will target a merger in the consumer and retail sectors.

Wag experienced significant growth during the pandemic as U.S. households raced to adopt pets, which CEO Garrett Smallwood last year described as “pawgress” in an email to Bloomberg Businessweek. The startup, which counts Battery Ventures and ACME as investors, in 2019 repurchased a 50% stake in itself from SoftBank Vision Fund. SoftBank first invested $300 million in the company in 2018.

Rover Group Inc., another company that provides pet care services including dog-walking, went public through a SPAC merger last summer. Its shares have tumbled 37% since the merger.