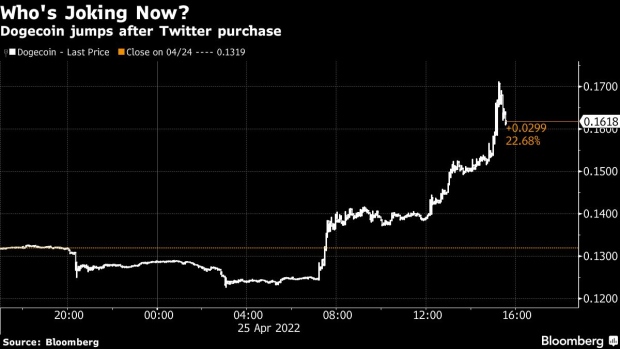 A sticker advertising Dogecoin on a cryptocurrency automated teller machine (ATM) at a laundromat in Hong Kong, China, on Friday, March 18, 2022. Bitcoin had spent the past few days mired in the tightest trading range since October 2020, a phenomenon some market watchers ascribed to long-term holders stepping in to buy whenever the token dips. Photographer: Paul Yeung/Bloomberg , Bloomberg

(Bloomberg) -- Dogecoin, the cryptocurrency with a Shiba Inu meme that has long been a favorite of Elon Musk, surged almost 30% after the billionaire entrepreneur agreed to buy Twitter Inc.

The meme coin climbed as high 17 cents. It was a standout on a day when other cryptocurrencies from Bitcoin and Ether to Solana and Polkadot remained relatively flat.

Musk said on Twitter in January that Dogecoin could be used to buy Tesla Inc. merchandise. Musk, a frequent booster of Dogecoin on social media, has hinted at the move for some time.

“Elon has openly supported Dogecoin and previously talked favorably of this token,” said Teong Hng, chief executive of Hong Kong-based crypto investment firm Satori Research. The “market is anticipating that he may incorporate Dogecoin as a payment system, hence this rally.”