Animal spirits are alive and well in the cryptocurrency world, with the frenzy sending Dogecoin surging as much as 50 per cent again and crashing Robinhood’s trading app.

Other so-called altcoins also took off, with Dash spiking as much as 14 per cent and Ethereum Classic jumping more than 30 per cent. In the world of DeFi, tokens such as Force DAO and Tierion surged more than 1,000 per cent on Tuesday, according to CoinMarketCap.com data. Meanwhile, Robinhood said it resolved earlier issues with crypto trading on its platform.

“You have money looking for a home and this is one of those areas of the market where there is speculation happening, there is significant appreciation happening in a short period of time,” Chad Oviatt, director of investment management at Huntington Private Bank. “You get that excitement there.”

The rallies defied easy explanation and continued a trend that’s seen the value of all digital tokens surge past US$2.25 trillion. Doge, created as a joke in 2013, has been used in marketing gimmicks, the latest by the Oakland A’s baseball team, which offered two seats to games this week for 100 Dogecoin. The Gemini crypto exchange backed by Tyler and Cameron Winklevoss said it now supports Doge, and will soon enable trading of it. 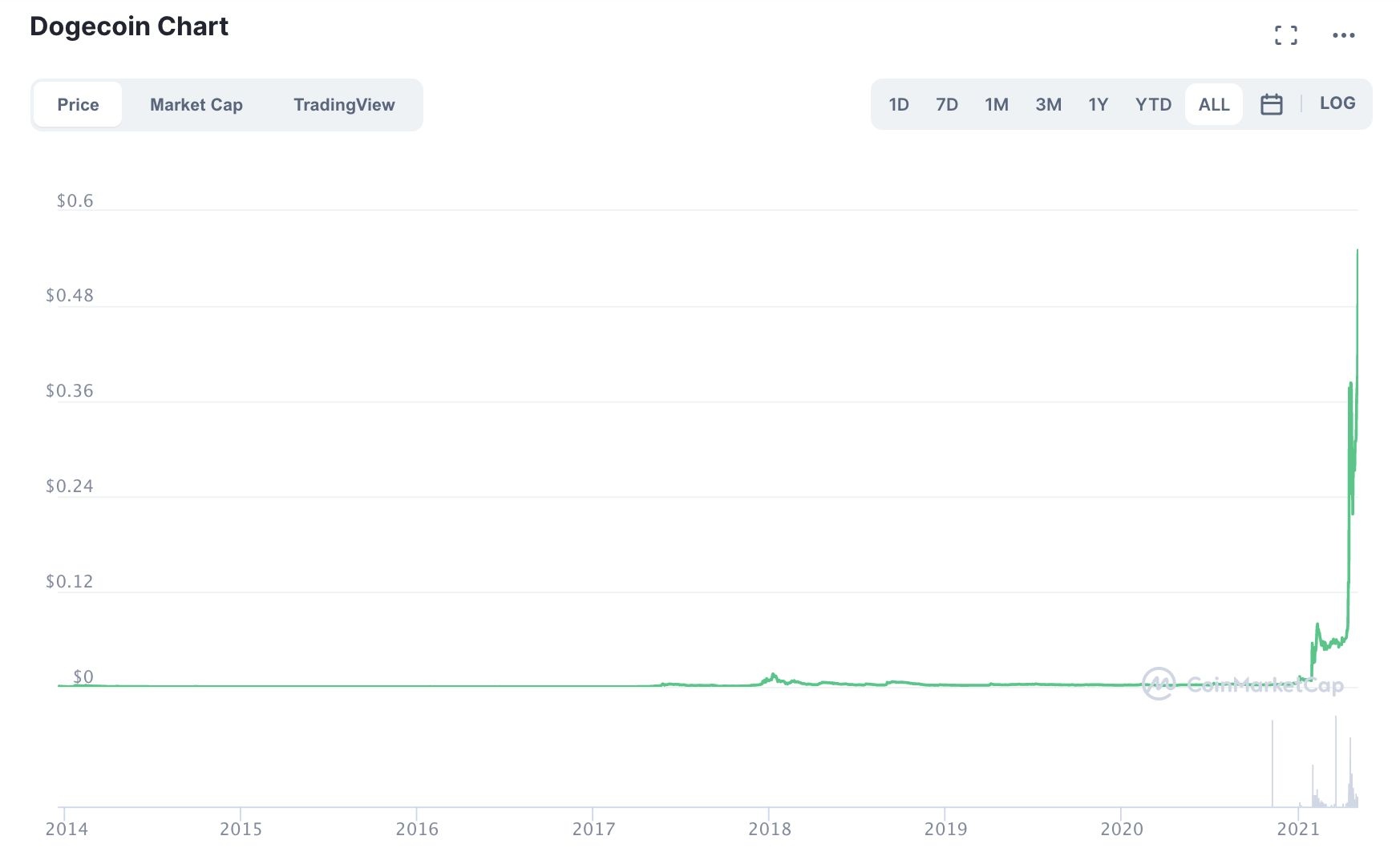 Dogecoin’s red-hot advance from around 0.002 cents a year ago -- when it was worth about US$300 million -- has captured the interest of many on Wall Street. It’s even caught the attention of the Federal Reserve -- the central bank’s chairman last week answered “some of the asset prices are high” when asked if things like GameStop Corp.’s and Dogecoin’s supercharged rallies created threats to financial stability.

As a sign of Dogecoin’s rising popularity, the Robinhood app is among the top 10 downloads at the Apple App Store. Meanwhile, Coinbase Global, the largest U.S. crypto exchange, doesn’t offer Doge trading -- saw its shares fall more than 6 per cent Tuesday. The stock is on track for the lowest close since its market debut last month.

“It’s pretty amazing that something that started out as a joke has become so popular,” said Matt Maley, chief market strategist for Miller Tabak + Co.

Though interest in digital assets has picked up in recent months as more traditional firms who were long hesitant to the crypto space warm up to cryptocurrencies, it’s alternative coins that have captured the most attention in recent days. Bitcoin has taken a backseat following record-setting rallies from Ether and Doge, wrote Edward Moya, senior market analyst at Oanda.

“The Dogecoin bubble should have popped by now, but institutional interest is trying to take advantage of this momentum and that could support another push higher,” he said in a note. “Dogecoin is surging because many cryptocurrency traders do not want to miss out on any buzz that stems from Elon Musk’s hosting of Saturday Night Live.”

Elsewhere, a new Ether ETF trading in Canada called the CI Galaxy Ethereum ETF (ETHX) broke its record volume on Tuesday, with more than US$22 million shares changing hands as of 12:30 p.m. in New York. That fund has attracted about US$162 million since its debut in March.

Meanwhile, many -- including famed crypto investor Mike Novogratz -- have warned that the rallies could be unsustainable. Novogratz, chief executive officer of Galaxy Digital Holdings, said recently he’d be “very, very worried” were one of his friends to invest in Doge.

“It seems that investors are careening from one hot dot to another, like a pinball game,” said Mike Bailey, director of research at FBB Capital Partners. “My sense is this speculative wave will suffer the same fate as the GME and other Robinhood ‘flash-in-the-pan’ stocks. Cryptocurrencies may have become a new asset class, like precious metals, but surges such as these seem unsustainable.”