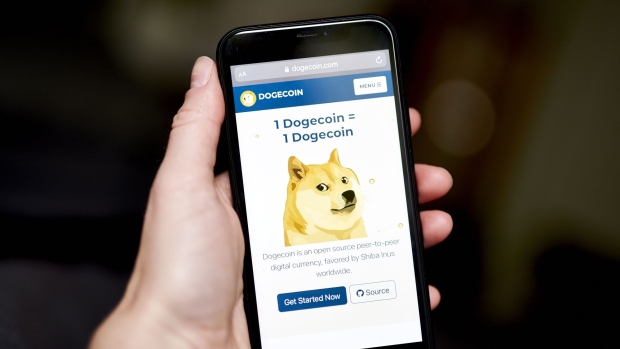 The Dogecoin website on a smartphone arranged in the Brooklyn borough of New York, U.S., on Friday, May 7, 2021. Dogecoin, a cryptocurrency conceived as a joke but now the world's fifth-most valuable, plunged from an all-time high after its most famous cheerleader, Elon Musk, jokingly called it "a hustle" on late-night TV. , Bloomberg

Dogecoin, the cryptocurrency with a Shiba Inu meme founded in 2013, surged on Friday after Elon Musk said on Twitter that it could be used to buy Tesla Inc. merchandise.

The meme coin was up about 15 per cent over the past 24 hours to around 20 cents as of 10 a.m. in New York, according to pricing from CoinGecko. It was a standout on a day when other cryptocurrencies from Bitcoin and Ether to Solana and Polkadot remained relatively flat.

Musk, a frequent booster of Dogecoin on social media, has hinted at the move for some time. In addition, numerous reports in recent days had indicated that source code on Tesla’s website included an option for Dogecoin payments.

Billy Markus, Dogecoin’s co-creator, tweeted earlier Friday with an image that appeared to show a Cyberwhistle available for a price of 300 Dogecoin.