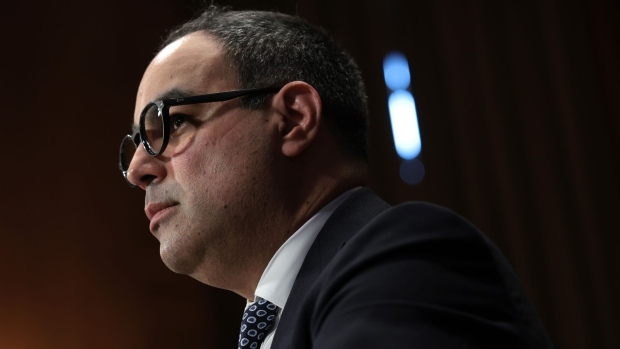 (Bloomberg) -- The U.S. Justice Department’s new antitrust chief says he will favor filing lawsuits to block problematic mergers rather than accept settlements that allow companies to proceed with their deals.

Jonathan Kanter said Monday night at a New York Bar Association event that the settlements that are frequently negotiated with government antitrust officials often suffer from “significant deficiencies” and fail to protect competition in markets.

“When the division concludes that a merger is likely to lessen competition, in most situations we should seek a simple injunction to block the transaction,” Kanter said. “It is the surest way to preserve competition.”

Kanter’s remarks come as the President Joe Biden has vowed to confront rising consolidation across industries that the White House says has harmed consumers and workers. Biden met earlier Monday with his Competition Council to discuss his administration’s efforts to bolster competition in the economy. That goal, he said, would help combat inflation, which has emerged as a threat to Democrats in midterm elections for the House and Senate this fall.

Kanter, the assistant attorney general for the Justice Department’s antitrust division, was among the administration officials who attended that meeting, according to a White House official.

In addition to outlining his approach to merger cases, Kanter set out his priorities for prosecuting monopoly cases and other lawsuits against companies for anticompetitive conduct. He said the Justice Department would seek to break up companies rather than accept so-called behavioral remedies in which a company agrees to end certain practices.

The department is in the middle of a monopoly lawsuit against Alphabet Inc.’s Google for allegedly abusing its power over internet search.

Kanter is a long-time foe of Google, and in private practice represented companies that have pushed antitrust enforcers to take action against the search giant.

Antitrust enforcers at the Justice Department and the Federal Trade Commission are grappling with a surge in dealmaking that they say is straining resources to review transactions. After last year’s record of more than $5 trillion worth of deals announced, this year is off to a brisk start with a rash of deals that includes Microsoft Corp.’s $69 billion acquisition of Activision Blizzard Inc.