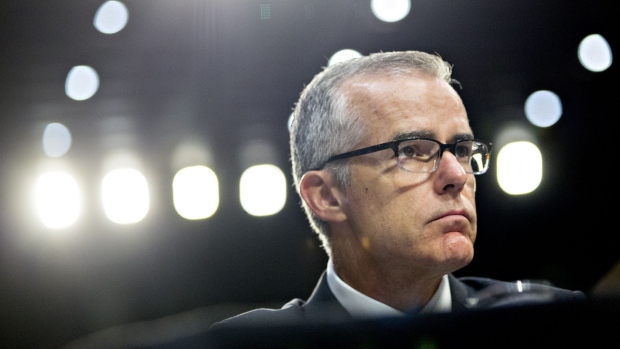 (Bloomberg) -- The Justice Department has closed its criminal investigation of Andrew McCabe, the former FBI deputy director who was fired after an internal review of his role in disclosing a Clinton Foundation probe to the media.

The department notified McCabe’s legal team on Friday that no charges will be brought against him, his lawyers, Michael Bromwich and David Schertler, said in a statement.

The decision not to charge McCabe is likely to be politically explosive because he’s one of President Donald Trump’s prime targets in criticizing the investigations into him and his 2016 campaign. The move by the Justice Department comes a day after Attorney General William Barr publicly rebuked Trump for issuing tweets and public statements that Barr said make it “impossible” for him to do his job.

The former FBI deputy was fired in March 2018, one month after the Justice Department’s Office of the Inspector General completed a report citing instances in which McCabe had failed to be candid with FBI agents and the inspector general’s office about his involvement in leaking confirmation of the Clinton Foundation probe to a Wall Street Journal reporter.

“At long last, justice has been done in this matter,” McCabe’s lawyers said in their statement. “We said at the outset of the criminal investigation, almost two years ago, that if the facts and the law determined the result, no charges would be brought.”

Trump has frequently tweeted denunciations of McCabe, including one a year ago saying, “Wow, so many lies by now disgraced acting FBI Director Andrew McCabe. He was fired for lying, and now his story gets even more deranged.”

To contact the reporter on this story: Chris Strohm in Washington at cstrohm1@bloomberg.net

To contact the editors responsible for this story: Bill Faries at wfaries@bloomberg.net, Larry Liebert, Kevin Whitelaw