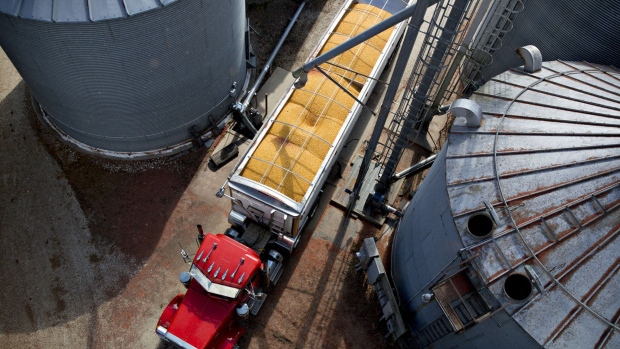 A truck hauls a load of corn between grain bins on a farm during harvest in Walnut, Illinois, U.S., on Monday, Oct. 9, 2017. Corn futures for December delivery gained 0.1% a bushel on Chicago Board of Trade. Photographer: Daniel Acker/Bloomberg , Bloomberg

(Bloomberg) -- Consolidation in agricultural markets is fueling higher prices for consumers and lower prices paid to farmers, according to the U.S. Justice Department’s No. 3 official, who promised aggressive antitrust enforcement in the industry.

Large buyers of agricultural products hold too much power and are creating supply bottlenecks between farmers and consumers, Associate Attorney General Vanita Gupta told a virtual meeting of the National Farmers Union Tuesday.

“Consolidation in agricultural markets has reached a tipping point, making it harder for small family farms and growers to survive,” Gupta said. “Farmers are being forced to bargain with large processors when they buy and sell goods, squeezing your profits while Americans pay more at the grocery store.”

The Biden administration is taking steps through regulation and antitrust enforcement to bring more competition to industries across the economy following a wave of consolidation that has led many markets controlled by a handful of big players.

Gupta said the Justice Department’s antitrust division intends to closely scrutinize mergers in the industry and anticompetitive conduct. The department has been investigating the country’s biggest beef processors.