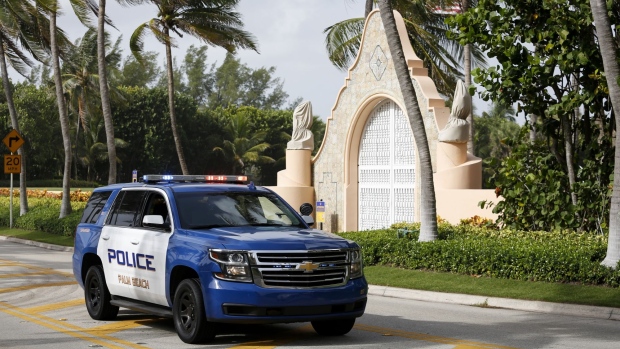 (Bloomberg) -- The US Justice Department asked a federal appeals court to expedite its review of an order appointing a special master to scrutinize documents seized from former President Donald Trump’s Mar-a-Lago estate.

Putting the appeal on a fast track could make the special master’s work -- which has just begun and is set to unfold over the next two months -- “unnecessary,” government lawyers wrote in a filing late Friday.

The Justice Department proposed a briefing schedule that would finish by Nov. 11, and asked the 11th US Circuit Court of Appeals to hold arguments soon after that. Trump opposed the move, according to the government’s brief.

US District Senior Judge Raymond Dearie, a semi-retired Brooklyn-based judge, is the special master overseeing a review of 11,000 documents seized from Mar-a-Lago in August as part of a federal probe into whether government records were mishandled. Dearie is tasked with making recommendations about whether any materials should be shielded from the government because they’re privileged. US District Judge Aileen Cannon, the Florida federal judge presiding over the document fight, earlier this week extended the timeframe for Dearie’s work into mid-December.

The Justice Department previously persuaded the 11th Circuit to carve out approximately 100 documents with classified markings from Dearie’s review. -The documents are a key component of both the criminal investigation as well as an intelligence assessment.

Now, the government wants the appeals court to again step in and halt the rest of the review. Investigators are barred from using the bulk of the seized materials in the criminal probe during the review, and argued that will “restrict the government’s ability to vindicate the strong public interest in proceeding expeditiously with the criminal and national security investigation that underlies these proceedings.”

Analyzing documents that were comingled with classified records “may shed light on, for example, how the materials bearing classified markings were transferred to plaintiff’s residence,” the DOJ contends. Documents that aren’t classified could still constitute evidence of obstruction, the government said.

The appeals court could also at least narrow the special-master review by ruling that Trump cannot assert executive privilege over any of the documents, restricting the search to records covered by attorney-client privilege, the DOJ said.

“Absent such resolution by this court, the special master proceedings could result in prolonged litigation,” the government said.

(Updated with additional information from the government’s motion.)