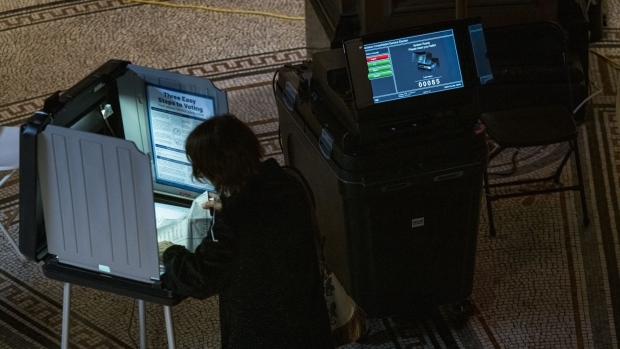 (Bloomberg) -- The Justice Department warned state and local officials about their obligations to protect the voting process and ballots as Republican-controlled legislatures pursue controversial audits of the 2020 election and push new laws that take powers away from election authorities.

The department issued guidance Wednesday providing information about the obligation to retain and preserve ballots and federal laws that govern how eligible voters can cast their ballots, according to Justice Department officials who previewed the documents for reporters before releasing them publicly.

The guidance comes as states led by Arizona pursue ad hoc audits of the 2020 election in response to demands from former President Donald Trump and his supporters, some of whom claim without evidence that the vote was tainted by widespread fraud. Several Republican-controlled states also are passing laws that impose restrictions for future elections.

The Justice Department is concerned that states might not be complying with federal laws when they conduct audits, one of the officials briefing reporters Wednesday said. The documents are intended to warn state and local officials that they can’t perform audits in a way that is going to intimidate voters, the official said.

The department also is concerned about intimidation and threats against election officials. The documents set down a marker that the Justice Department is watching what’s going on in states around the country and will be following the actions closely, the official said.

The Republican-driven audit of the 2020 election in Arizona’s largest county is being done by Cyber Ninjas Inc., a Florida-based firm hired by Arizona Senate Republicans.

Arizona Democrats sued to halt the audit, arguing that the head of Cyber Ninjas has promoted Trump’s baseless election fraud claims and alleging that the firm’s contractors are violating state law in their failure to protect Maricopa County’s 2.1 million ballots, hundreds of tabulation machines and voter information.

However an Arizona judge ruled in April that the audit could move forward.

The Justice Department’s guidance is also meant to inform officials that federal protections for ballots apply regardless of whether the ballots are in the hands of government officials or a private company.

“We are scrutinizing new laws that seek to curb voter access and where we see violations we will not hesitate to act,” Garland said at the time.