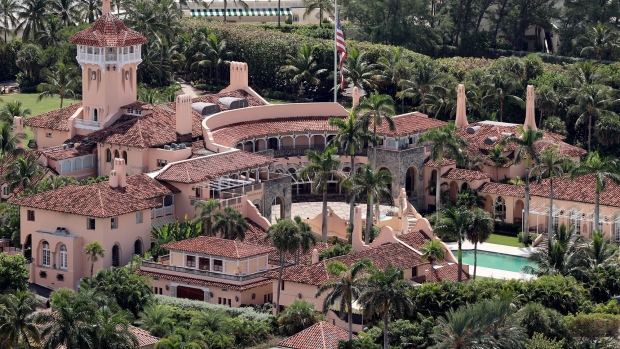 (Bloomberg) -- A federal appeals court granted the US Justice Department’s request to expedite its challenge to a Florida judge’s appointment of a so-called special master to review thousands of White House documents seized from Donald Trump’s Mar-a-Lago estate.

The order Wednesday from the 11th Circuit US Court of Appeals didn’t immediately specify when arguments would happen -- or which judges would hear them -- but set a briefing schedule that wraps up on Nov. 17.

Trump’s legal team had opposed putting the case on a faster track, arguing instead to have a hearing in January, at the earliest. But the government argued the case must be rushed so it can gain access to 11,000 documents that it’s currently barred from using during the special-master’s review.

“Having consulted with the Chief Judge, the appeal will be assigned to a special merits panel from the classified appeals log randomly selected by the Clerk,” the court wrote. “That panel will decide when and how to hear oral argument.”

The appeals court gave Trump until Nov. 10 to file his brief, six more days than the government had proposed but less time than Trump’s lawyers wanted. The government brief is due Oct. 14.

The order is the latest setback for Trump before the appeals court, which earlier rejected his attempt to keep the Justice Department from accessing about 100 documents bearing classification markings -- some of them labeled top secret -- that were seized from his home. DOJ argued the documents were key to its ongoing criminal probe into Trump’s handling of White documents.

US District Senior Judge Raymond Dearie, a semi-retired Brooklyn-based judge, is the special master overseeing a review of 11,000 documents seized from Mar-a-Lago in August as part of a federal probe into whether government records were mishandled.

The government told Dearie Wednesday that the parties successfully signed a contract with a third-party vendor to perform the crucial task of scanning and uploading the documents as part of the special-master review. The process was delayed after multiple proposed vendors told the government they were “unwilling” to contract with the former president.

US District Judge Aileen Cannon, the Florida federal judge presiding over the document fight, earlier this week extended the timeframe for Dearie’s work into mid-December.

Cannon’s order appointing the special master temporarily bars the government from using most of the seized documents.