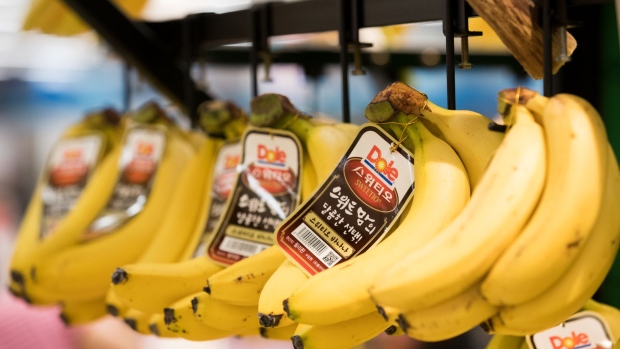 (Bloomberg) -- Dole Plc, the world’s largest produce company, fell as much as 9.4% in its trading debut after delaying and downsizing its U.S. initial public offering to raise $400 million.

The firm’s return to the market for its third run as a public company was a bumpy one. Dole initially offered 26 million shares for $20 to $23 and planned to go public on Tuesday. It put off the share sale to Thursday, changing the terms to offer 30.3 million shares for $16 to $17. It ended up selling only 25 million shares.

Chief Executive Officer Rory Byrne chalked up the twists and turns of the week partly to a surge of listings. He said the company’s objectives of the listing weren’t short term and, with a diverse business and the iconic Dole brand, it’s positioned well for growth and to attract investors.

“When we took on the IPO, we couldn’t anticipate there would be 23 this week,” he said in an interview. “The timing was what it was, the valuation is what it is.”

Dole’s listing was the sixth-biggest of the week on U.S. exchanges, according to data compiled by Bloomberg. Robinhood Markets Inc., the biggest of those with a $2.1 billion offering, fell in its debut Thursday. At least three other companies postponed share sales that had been set for this week.

Dole was formed from the combination of Charlotte, North Carolina-based Dole Food Co. and Ireland’s Total Produce, a transaction that was completed in February. Trading of Total Produce’s shares in Dublin and London is ending with the U.S. listing, according to the company’s filings with the U.S. Securities and Exchange Commission.

The combined company had $58 million in net income on revenue of $2.3 billion in the first quarter of this year, according to its filings. Dole plans to use the IPO proceeds to pay some of the cost of that transaction, as well as to reduce debt and for general corporate purposes.

David H. Murdock took Dole private for the first time in 2003 after rescuing it from bankruptcy. He re-listed the company in 2009 before taking it private again in 2013 as chairman, chief executive officer and the biggest shareholder. Dole filed in 2017 to again go public but withdrew its application the following year.

The offering was led by Goldman Sachs Group Inc., Deutsche Bank AG and Davy Group. Dole is trading on the New York Stock Exchange under the symbol DOLE.