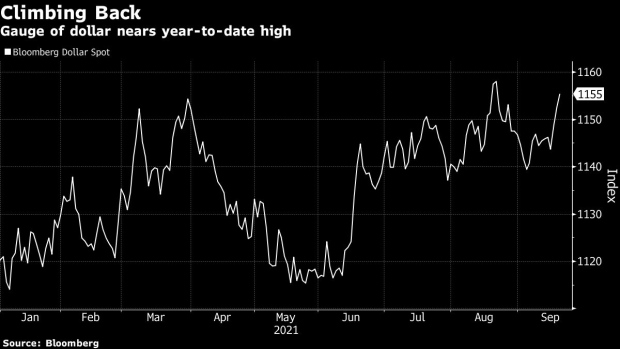 (Bloomberg) -- Currency traders are seeking the safety of the dollar in the face of a global slump in equities spurred by worries over China’s real estate sector and the prospect that the Federal Reserve will hint this week at plans to curb stimulus.

A Bloomberg gauge of the dollar’s strength against major peers is approaching a year-to-date high set in August. It’s poised to rise for a third straight day, a span in which it’s gained the most in a month.

The only Group-of-10 currencies to outperform the dollar Monday were the yen and the Swiss franc, traditional haven currencies that tend to rally during periods of market turmoil.

The Canadian and Australian dollars were among the biggest losers as commodities sank in response to angst about the global growth outlook.