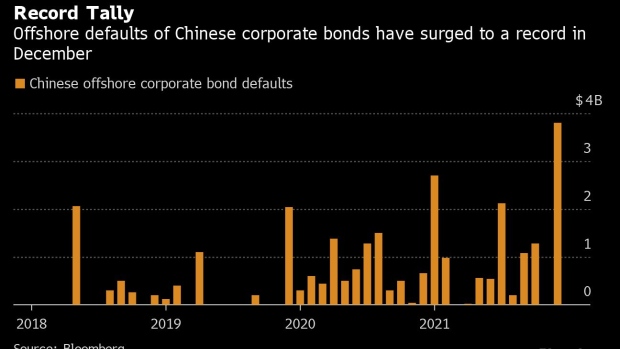 A U.S. one-hundred dollar banknote and a Chinese one-hundred yuan banknote are arranged for a photograph in Hong Kong, China, on Monday, April 15, 2019. China's holdings of Treasury securities rose for a third month as the Asian nation took on more U.S. government debt amid the trade war between the world’s two biggest economies. Photographer: Paul Yeung/Bloomberg , Bloomberg

(Bloomberg) -- December is poised to be a record month for Chinese offshore corporate defaults after missed payments by indebted companies including China Evergrande Group and Kaisa Group Holdings Ltd.

Chinese firms have defaulted on a record $3.8 billion in dollar bonds so far this month, data compiled by Bloomberg show. The previous monthly high was in January when Chinese borrowers failed to repay $2.7 billion dollar notes.

A month that saw Evergrande and Kaisa officially labeled defaulters, December has seen a precarious rally in Chinese junk bonds threatened by heightened anxiety over the financial health of other companies such as Shimao Group Holdings Ltd. and Guangzhou R&F Properties Co., as a liquidity crisis sparked by a government crackdown on excessive borrowing by developers ripples through the sector.

This year has seen Chinese borrowers default on $13.3 billion of offshore bonds, with real estate firms making up half of the total, according to data compiled by Bloomberg.

More credit risk is simmering, with January set to be an even busier month for maturities. Chinese developers need to repay or refinance about $6 billion dollar bonds, according to data compiled by Bloomberg. Guangzhou R&F is asking holders of a $725 million dollar note maturing Jan. 13 to extend the due date by six months, and is offering to buy back some of the debt at a discount. If the proposals aren’t backed, the company said it might not be able to fully pay off the note.

A record pace of defaults and downgrades for Chinese borrowers has recently sent junk dollar bond yields to a record high. Such surging borrowing costs have shut down offshore refinancing channels for Chinese firms, and an HSBC report last week said such funding will only reopen to the highest-quality Chinese property developers in the second half of 2022.