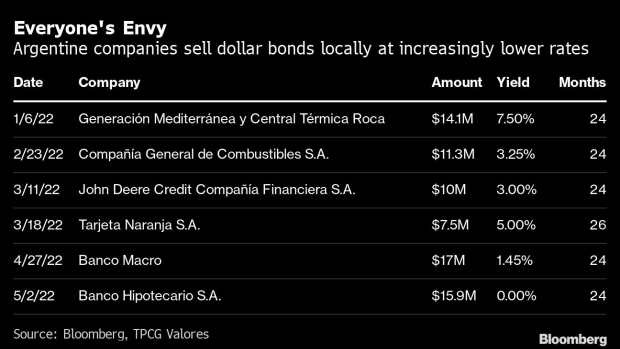 (Bloomberg) -- Argentine banks have latched on to a lucrative trade that produces all-but-guaranteed profits while also allowing local corporations to sell dollar bonds paying coupons as low as 0%.

They’ve turned to a loophole in complex currency regulations meant to keep dollars from flowing out of the country. To profit from it, banks buy dollar-denominated local bonds, then sell them for pesos in an unofficial market where the dollar is much stronger. They then swap those pesos for dollars at the official rate, profiting from the exchange-rate gap.

Some banks recently caught on to the opportunity and have become the largest buyers of these bonds over the last few weeks, according to people familiar with the matter, who asked not to be identified discussing confidential information.

The central bank says that such an operation is not allowed, and that it would begin an investigation on banks seen buying and selling bonds using such a trade, according to a spokesman. The country’s two associations for private banks didn’t reply to a request seeking comment.

The trade is so popular that it’s boosted demand for corporate-bond sales to the point that companies including Banco Hipotecario, a local lender, have issued debt with 0% coupons. Slightly riskier firms are still able to sell notes with yields below 3%, a ridiculously low rate for issuers from a country known as a serial defaulter, especially given that US-based junk bonds are yielding 7.5%.

The central bank last week sent an informal warning to bank associations not to engage in that foreign-exchange arbitrage, according to a different person.

“There’s no regulation condemning these trades, and anything that isn’t prohibited is allowed,” said Carlos de Nevares, senior analyst at Moody’s in Argentina. “The financial sector believes it’s allowed, but the central bank says it’s not.”

It’s all part of the wild world of investing in Argentina, a junk-rated country with high levels of government spending, annual inflation above 50% and a track record of three defaults since the turn of the century. In an effort to stabilize its economy, Argentina has leaned on increasingly stringent exchange controls.

Those seeking to take advantage of the exchange-rate distortions have boosted demand for new bonds. Banco Macro -- rated nine levels below investment grade by Moody’s Investors Service -- sold $17 million of two-year notes on April 27 at a yield of 1.45%. Banco Hipotecario sold almost $16 million of securities at a 0% coupon on May 2.

Amid the strict controls, banks are among few players with some access to the official currency market as they can trade currencies for their own balance sheets. This is how a transaction would work: A bank buys $1 million of dollar denominated bonds issued by a local company. It then sells them at a modest discount, typically about 10%, on the secondary market, where the dollar is valued at 206 pesos, receiving 186 million pesos. The bank can then convert those 186 million pesos back to dollars at a rate of 117 pesos per dollar, leaving it with $1.59 million -- i.e., a quick 59% profit with a minimum of effort.

The biggest loser in these transactions is the central bank because the trade drains already dwindling foreign reserves at a time the government is struggling to bolster its coffers to meet targets laid out in its recent deal with the International Monetary Fund. That said, the amounts involved are fairly small relative to the country’s $42 billion of gross reserves.

For Paula La Greca, a corporate fixed-income analyst at TPCG Valores in Buenos Aires, the ability of Argentine companies to sell dollar bonds at such low yields is a signal that the exchange-rate gap is warping the market.