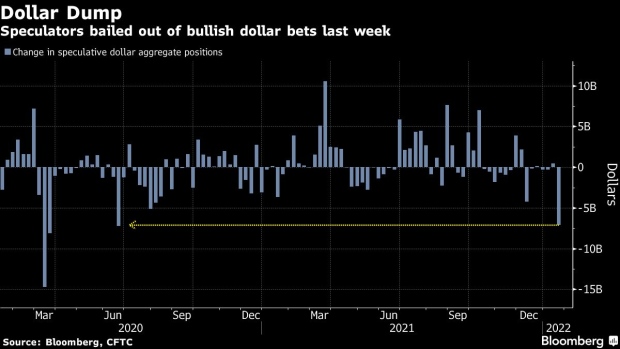 (Bloomberg) -- Speculators that scrapped bullish bets on the dollar at the fastest pace in more than 18 months are now missing out on the currency’s gains ahead of a key Federal Reserve meeting this week.

Net-long aggregate speculative positions versus major peers dropped the most since June 2020, according to the latest data from the Commodity Futures Trading Commission. It comes despite recent dollar gains in the run-up to the Fed’s rate decision on Wednesday, where economists expect it to signal a March hike in interest rates and balance-sheet reduction later this year to help fight inflation.

Money markets have fully priced in a 25-basis-point rate hike from the Fed in March, and are wagering on a total of four increases for 2022. While prospects for such a tightening cycle buoyed the dollar in recent days, that run is threatened by speculation that the outlook for the U.S. central bank is too aggressive.

Going short the dollar is “looking like a play which makes logical and rational sense to us, and probably the cleanest way to position for a dovish Fed this week,” said Viraj Patel, global macro strategist at Vanda Research. “Any dovish repricing on the Fed will be felt through on dollar crosses. The dollar is also taking its signal from weaker macro data in the U.S.”

Being bullish on the greenback was the popular currency trade going into 2022, leaving those still long nervous that its rally may begin to stall. After delivering a 4.8% advance last year -- the most since 2015 -- the Bloomberg Dollar Spot Index has risen less than 0.2% in January, breaking its link with Treasury yields that have soared to levels not seen since before the pandemic.

Key to the U.S. currency’s trajectory is the Fed’s hawkishness relative to major peers such as the European Central Bank and Bank of England, though the dollar’s fate is also linked to broader risk sentiment with focus on potential conflict in Ukraine. Bloomberg’s dollar gauge climbed 0.3% as of 7:35 a.m. in New York, extending last week’s gains that were the biggest in nearly a month.

The shift in dollar bets makes for “more balanced positioning” that could pave the way for gains down the road when the Fed begins its rate increases, ING Bank NV strategist Francesco Pesole wrote in a note.

“The lack of indication that the dollar net-long positioning is overstretched suggests that there is room for a further build-up in dollar long positions into the start of Fed tightening cycle,” he added.