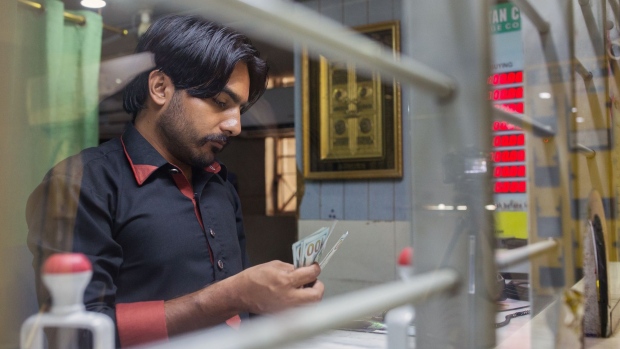 A teller counts U.S. hundred dollar bills inside a currency exchange store in Karachi, Pakistan, on Monday, July 9, 2018. The Pakistan economy is in distress. How else to describe an emerging market that has seen three currency devaluations since December, depleted its foreign-currency reserves and may soon ask for a bailout from the International Monetary Fund, less than two years after its last $6.6 billion emergency cash infusion. Photographer: Asim Hafeez/Bloomberg , Bloomberg

(Bloomberg) -- The shortage of dollars in Pakistan is creating a dislocation in the foreign-exchange market, with banks offering different rates than the interbank market.

Banks are offering higher spreads than the interbank market for import and export transactions because they are unable to cover import payments, Tresmark, a financial portal for treasury markets, said in a note to its clients.

The South Asian nation is seeing a severe dollar shortage as a delay in its bailout program from the International Monetary Fund raised concern it could follow Sri Lanka into a default this year. The nation’s rupee had its biggest drop since 1998 last week amid worsening external finances.

Banks last week provided dollars to energy companies at about 8% higher than the official closing rate for the day, Bloomberg News reported earlier. Importers, which used to get dollars in a day for overseas payments, are now facing a delay of more than a week, said Raheel Ahmed, chief executive officer at V.N. Lakhani and Co., a Karachi-based steel importer.

Pakistan’s central bank is discouraging interbank trading due to a severe shortage of dollars, people with knowledge of the matter told Bloomberg early this week. The currency has tested a series of record lows and is down more than 30% this year.

The central bank has stepped up measures to preserve foreign reserves. It asked commercial lenders to manage import-payment requests from their own inflows, such as exporter accruals and remittances, according to people with knowledge of the matter. The rupee depreciation is expected to stop soon, according to the nation’s finance minister.

In a couple of weeks, you will see that the nation’s inflows of dollars will be more than imports, Finance Minister Miftah Ismail said in a discussion with think-tank Tabadlab on July 26. “Once that happens, pressure on the rupee will vanish.”

Pakistan is expected to receive $1.2 billion funding in late August after the IMF’s board meeting on the 24th of the month. It also anticipates another $4 billion in financing from bilateral countries including Saudi Arabia.