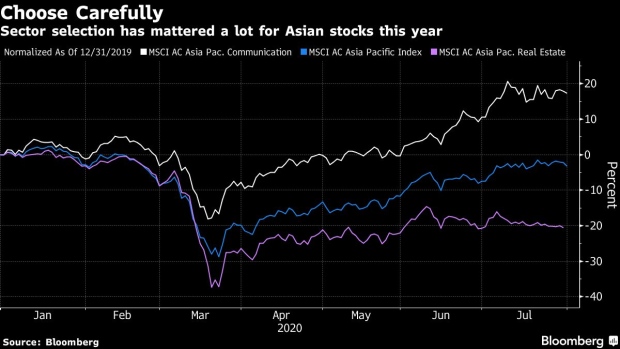 (Bloomberg) -- The sliding U.S. dollar is buttressing the case for a further recovery in Asian shares despite jitters caused by spikes in coronavirus cases.

The drop in the greenback -- about 4% in July alone -- may spur flows to Asian markets, fund managers and strategists said. The MSCI Asia Pacific Index capped its fourth monthly gain Friday, helped by technology shares. Taiwan Semiconductor Manufacturing Co. briefly became the world’s 10th most valuable firm in the past week. Samsung Electronics Co. advanced about 7%.

“A weaker U.S. dollar tends to be beneficial for Asian equities,” said Ayaz Ebrahim, a portfolio manager at JPMorgan Asset Management in Hong Kong. “It renders Asian earnings to be worth more in U.S. dollar terms, and of course it signals higher risk appetite which is beneficial to the asset class.”

The outlook for some Asian economies is gradually improving, though the pace of the recovery remains uncertain because of the pandemic. The first official gauge of China’s economy in the second half showed upward momentum, while South Korea’s month-on-month June industrial production beat estimates.

“Emerging Asia continues to be one of the brightest spots in our global recovery outlook, and we’ve seen that most exemplified in China,” said Emily Weis, a macro strategist at State Street Corp. in Boston.

Strategists at Sanford C. Bernstein recently switched to being overweight on emerging markets for the first time in two years, and said they favor developing nations in Asia.

Though foreign flows to Asian stocks have been weak this year, there are signs of renewed appetite. Foreign purchases of South Korean shares touched a high for 2020 during the week ended July 29, while Japan got net monthly inflows for the first time since January, Jefferies said Friday, citing EPFR Global data.

As always, risks abound. Japan and Australia are among countries grappling with rising infections. Earnings for the June-quarter highlight the long struggle toward a full global recovery. For Citigroup Inc., commodities-rich Latin America is better bet than Asia, as the latter is more at risk from geopolitics with both Democrats and Republicans holding a negative view on China.

Many Asian countries rely on exports and inbound tourism, and rising tensions between the U.S. and China may weigh on the region’s stocks, said Sean Taylor, Asia Pacific chief investment officer at DWS Group.

“To see strong performance in Asian stocks, we need to see sustained recovery in global growth and risk sentiment, and earnings to come through,” Taylor said. A weaker dollar will more likely benefit Asian bonds, he added.

Technology stocks are among those that led the Asian rally from March’s lows. The tech sectors in Taiwan and South Korea -- particularly semiconductors -- are set to gain from greater flows to the region, said Andy Wong, senior multi-asset investment manager at Pictet Asset Management.