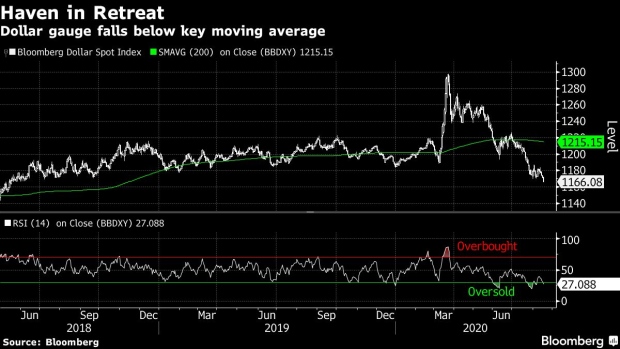 (Bloomberg) -- The dollar sank to its lowest level since May 2018 on Tuesday on concern that the world’s biggest economy will struggle to regain momentum amid a standoff over further virus relief and as infections continue to mount.

The Bloomberg Dollar Spot Index fell as much as 0.6%, dropping for a fifth straight session and bringing its 2020 decline around 1.7%. On the day, the greenback is tumbling against all its major peers, led by the pound and the euro, which climbed to a two-year high.

The greenback has been on the defensive since mid-year, with lawmakers unable to agree on measures to support the economy’s recovery from the pandemic, and with U.S. real yields dropping to multi-year lows. On top of that, investors’ attention is turning to the November presidential election and the uncertainty that may bring.

“Broader positioning against the USD is not overly stretched,” said Shaun Osborne, chief foreign-exchange strategist at Scotiabank. Investors and speculators are “only just starting to embrace the short USD story. There is room for this move to run.”

Wagers on dollar losses by hedge funds and other large speculators have been building, but have yet to reach the levels seen in 2017 and 2018, according to Commodity Futures Trading Commission data.