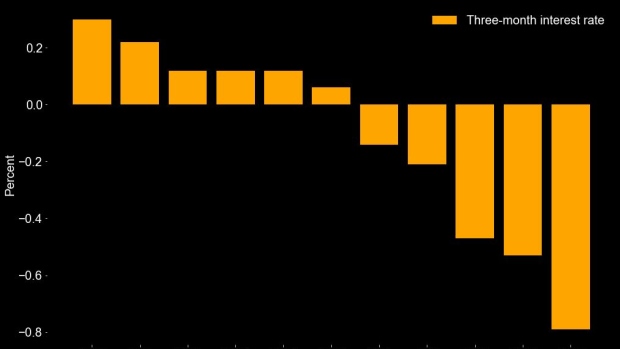 (Bloomberg) -- A nascent revival in the dollar, after a summer of predictions about its demise, is highlighting why it’s still the ultimate haven currency.

After abandoning the greenback due to the Federal Reserve’s accommodative policy, some investors are piling back in, leading to a squeeze of short positions. Liquidity, yield advantage and a lack of alternatives have helped to rekindle interest just as the U.S. starts to get a handle on the coronavirus pandemic in some places.

The Bloomberg Dollar Spot Index is poised to gain more than 1.5% this week, the biggest five-day advance since April. Technicals suggest more gains are in the pipeline. The gauge had dropped over 10% from its March highs to this year’s low in September, with hedge funds turning bearish on the dollar for the first time since May 2018.

“The dollar is the safe haven of choice until we get new information on the vaccine, earnings, election and stimulus,” said Thomas J. Hayes, chairman of hedge fund Great Hill Capital LLC in New York. “Until then, the dollar is likely to have bottomed in the short term.”

Still, history cautions that a further advance is far from certain. The greenback also rallied in June but quickly gave back its gains as concerns about the global economic outlook receded.

Here’s a look at the dollar’s advantages in retaining its status as the supreme haven currency:

While futures indicate the Fed will keep the policy rate near zero at least until the end of next year, that isn’t as dovish as the negative-rate policy adopted by the European Central Bank and the Bank of Japan.

At about 0.2%, the greenback’s three-month interest rate is the highest among Group-of-10 currencies after the New Zealand dollar, according to data compiled by Bloomberg. The dollar is expected to take pole position if the Reserve Bank of New Zealand goes ahead with a plan to deploy sub-zero rates to support growth.

A dearth of alternatives is another factor in the dollar’s favor. Gold, which has gained almost 20% since end-March to outperform the greenback, offers no yield and, in some cases, costs money for storage.

The yen is another traditional haven, but a collapse of its positive correlation with equity volatility suggests that this status is weakening.

The liquidity factor also supports the greenback. The currency’s daily average turnover is five times that of the yen’s and more than twice that of the euro, according to a report from the Bank for International Settlements in April 2019.

During the height of the coronavirus pandemic in March, a rush for the dollar triggered a spike in the greenback and a surge in its borrowing costs in foreign-exchange swap markets. That in turn prompted the Fed to boost dollar supply in cooperation with other central banks.

“There’s still a great deal of confidence in the U.S. dollar being the go-to currency when markets become very volatile,” said Tai Hui, chief Asia market strategist at JPMorgan Asset Management. “A lot of investors are just being ready for a period of increased volatility which drives the dollar stronger.”