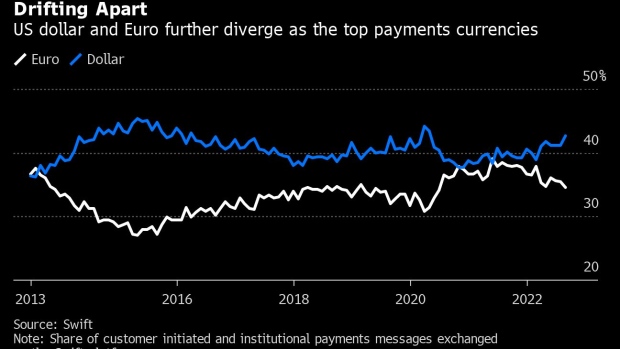 An electronic board displays euro and U.S. dollar prices at a foreign currency exchange bureau in the Beyoglu district of Istanbul, Turkey, on Thursday, May 14, 2020. The global demand shock that followed the coronavirus pandemic is exposing a key vulnerability for Turkey’s external finances, with stimulus at home worsening an imbalance between imports and exports while creating another pressure point for the lira. Photographer: Kerem Uzel/Bloomberg , Bloomberg

(Bloomberg) -- The use of the euro as a global payment currency dwindled last month, reaching the smallest share in more than two years, as the common currency comes under pressure amid a strengthening US dollar.

Payments using the euro dropped to 34.5% of the market in August, a full percentage-point lower from the previous month, according to data from the Society for Worldwide Interbank Financial Telecommunications, or SWIFT, a global financial messaging firm. Meanwhile, the dollar has been gaining share since May and remained in the top spot for the fifteenth consecutive month with a 42.6% share, the report released Wednesday showed.

As Europe teeters on the brink of recession amid record inflation and an energy crisis worsened by Russia’s escalating war in the Ukraine, the euro has lost its appeal for use in deals. Instead, investors are fleeing to the safety of the dollar and further cementing its place as investors’ currency of choice. The greenback has been dominating global payments, for the most part, since 2013.

Such moves have also pushed the gap between payments in the two currencies to the widest in nearly two and half years as the euro’s proportion of payments fell to the lowest since June 2020. The spread has broadened from just over 1 percentage point in February to more than 8 percentage points in August. That falls in line with the euro’s more than 12% depreciation against the dollar this year.

Still, despite usage falling for the third straight month, the euro held onto its spot as the second most used legal tender in the world after the greenback, keeping ahead of currencies like the British pound and the Japanese yen.

Elsewhere, the Chinese yuan’s share of transactions rose to the highest since January at 2.3%, even as the country grapples with an economic slump. And the use of the Canadian dollar was the worst since February 2018. The loonie has slumped over the past week and continued to trade at two-year lows against the dollar on Wednesday.

A struggling Japanese yen, which fell to a level unseen since 1998 earlier this month and is down about 20% year-to-date against the dollar, hasn’t gained ground when it comes to transactions either. Use of the yen slid slightly in August to make up just 2.7% of all global payments, its lowest since May.