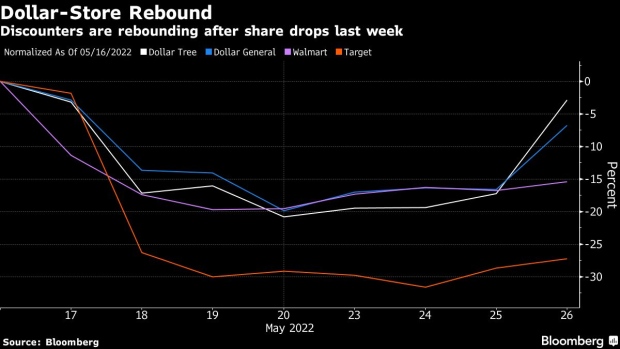 (Bloomberg) -- Shares of two deep-discount retailers are on track for record gains after each posted stronger-than-expected quarterly results and raised their sales forecasts, a sign that the chains have avoided the malaise that’s dragged down some of their bigger rivals.

Dollar Tree Inc. also raised its profit forecast for the current fiscal year after completing a shift to a benchmark price of $1.25 for its products, according to a company statement Thursday. Dollar General Corp. maintained its earnings outlook “despite ongoing headwinds due to supply-chain pressures and heightened inflation.”

The results underscore the appeal of discounters for budget-conscious shoppers amid the highest US inflation rates in four decades. Investors had been bracing for retailers to report more grim numbers this week after Walmart Inc. and Target Corp. posted weak results and cut their profit outlooks -- sparking the biggest share declines since the 1980s.

“Our initiatives are working and providing increased profits and cash flow,” said Michael Witynski, chief executive officer of Dollar Tree, which recently revamped its board under pressure from activist investor Mantle Ridge. He added that “now is the ideal time to accelerate investments.”

Dollar Tree shares, which sank last week along with those of many other store operators, jumped 21% to $161.54 at 2:52 p.m. in New York, a record increase on a closing basis. The stock had fallen 18% this month through the close of trading Wednesday. The surge touched off a broader industry rally, with all 21 companies in an S&P 500 retail index posting gains.

Chairman Rick Dreiling, a former Dollar General CEO who joined Dollar Tree this year with Mantle Ridge’s backing, said on a call with analysts that more spending was needed in better systems technology and “competitive wages.” Witynski, Dollar Tree’s longtime CEO, agreed and said those investments would spur operational gains during the next two to three years.

“We are at an inflection point to exhibit our earnings power into the years ahead,” Witynski said.

During the first fiscal quarter, Dollar Tree’s comparable sales rose 4.4%, topping the 2.1% average of analyst estimates compiled by Bloomberg. For the year as a whole, the Chesapeake, Virginia-based company predicted adjusted earnings of $7.80 to $8.20 a share, up 20 cents at the midpoint from the previous forecast.

The underlying improvement was even greater since the new outlook includes one-time costs of 43 cents a share, which were excluded from the earlier forecast. Most of the expense was tied to a rodent infestation at a distribution center in West Memphis, Arkansas, which prompted a recall after an inspection by the US Food and Drug Administration. The company said earlier this month that it would close the facility.

Dollar General jumped 14% to $223.37, also bouncing back from steep losses since the beginning of May as earnings and sales in the first fiscal quarter topped analyst estimates. As with Dollar Tree, Dollar General’s gain would be a record on a closing basis.

Second-quarter results are better than initially expected so far, CEO Todd Vasos told analysts on a conference call. Dollar General has been reducing out-of-stock items, a boost for sales and a sign the company is managing through supply-chain disruptions.

During the current fiscal year as a whole, the retailer said revenue would rise as much as 10.5% this year, up from the previous forecast of about 10%.

Same-store sales will climb as much as 3.5%, Dollar General said. The Goodlettsville, Tennessee-based company had previously predicted a gain of no more than 2.5%.