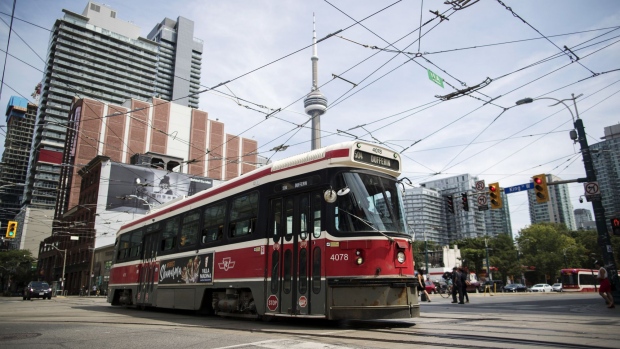 A Toronto Transit Commission (TTC) streetcar travels past the CN Tower in Toronto, Ontario, Canada, on Thursday, Aug. 2, 2018. The TTC had to return 67 out of 89 new streetcars back to Bombardier Inc. for preventative repairs in July, this in a proactive effort by the manufacture to ensure longevity, "all in full transparency with TTC and their riders," a company spokesperson said. , Bloomberg

Ontario residents will head to the polls in just over two weeks to elect a new legislature in a race that will decide the future of Progressive Conservative Premier Doug Ford and the post-pandemic recovery plan for Canada’s most populous province.

On Monday, the leaders of the four parties faced off in a televised debate that saw the opposition largely unite to attack front-runner Ford’s record on COVID-19, health-care and affordability.

With the cost of living topping voter concerns, the three major parties are offering up a grab-bag of high-spending promises in an unapologetic bid to entice voters.

Ontario’s centrist party, the Liberals, has pledged to slash transit fares across the province to $1 (US$0.78) a ride for a year. Regular cash fares in Toronto are about $3.25; a trip from Toronto to Mississauga, a suburb, costs about $7.55. The proposal, with a slogan reminiscent of Ford’s 2018 ‘Buck a beer’ promise, is meant to provide immediate relief to stretched consumers, party leader Steven Del Duca has said.

The Ontario New Democratic Party (ONDP), led by Andrea Horwath and considered left of the Liberals, has promised to freeze taxes for low and middle income families. The platform document is light on details, but the Toronto Star reported on April 25 that the policy would last for four years and target households with a combined income of less than $200,000.

Meanwhile the Liberals said they will remove the provincial sales tax on prepared meals under $20, paying for the measure with a 1 per cent surtax on companies whose annual profits exceed $1 billion, as well as a 2 per cent income tax hike for individuals with annual income over $500,000.

Both the Liberals and the New Democrats have pledged to start working toward a four-day work week and establish a limited pilot project to study the concept.

The Liberals and the ONDP promised to eliminate interest rates on student debt. Under the existing program, students have to start repaying loans six months after graduating, although interest is charged during the grace period. Under the ONDP plan, the government would retroactively wipe out any interest owed or paid to the province by a current or past student.

Changes to the way Canada holds elections have been promised for years. The ONDP wants to create a mixed-member proportional system, which typically allows voters to have two votes: one for a constituency representative and the other for a political party. When Del Duca won his party’s leadership, he promised to introduce ranked ballots, where voters can list their preferences in order.

The Progressive Conservative Party has not officially released its platform, and did not provide a timeline when contacted by Bloomberg, but many voters have already received C$440 checks after the party eliminated license plate renewal fees in March and began mailing out refunds.

Ford has been gaining ground. On 338Canada.com, a widely-followed polling site, his party was projected to win about 38 per cent of the vote as of May 16, a 10-point lead over the Liberals. Big spending measures promised in the recent provincial budget include: