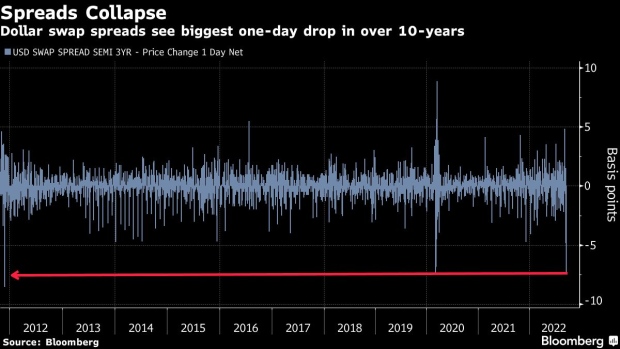 (Bloomberg) -- The drop in front-end US dollar swap spreads is poised to be the biggest since 2011, when the Federal Reserve announced coordinated central bank plans to boost liquidity by lowering interest rates on dollar swap lines.

The spread between the two- and three-year dollar swap rate and the comparable Treasuries dropped as much as 8 basis points on Monday as the global selloff in government bonds deepened. The equivalent SOFR swap spread -- referencing the secured overnight financing rate -- also fell up to 8 basis points on Monday, the biggest drop on record in Bloomberg data back to October 2020.

Further out the curve, the longer-dated spreads fell 3 basis points as US cash yields push to fresh highs since 2007 amid diminishing liquidity. The Bloomberg index that tracks the average yield error across the universe of US Treasury notes and bonds rose again Monday, almost reaching the March 2020 liquidity crisis highs.