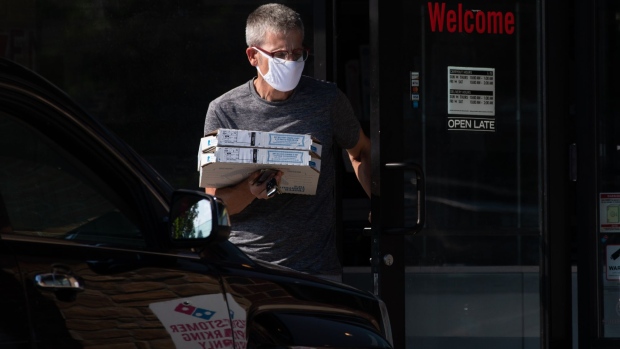 The chain, whose delivery and take-out model helped shield it during lockdowns across the U.S., reported same-store sale gains in its home market of 16.1 per cent in the second quarter ended June 14.

That’s better than analysts had predicted and up sharply from the 2.1 per cent growth logged in the same period last year.

Shares swung between gains and losses in pre-market trading. They were up 1.5 per cent as of 7:44 a.m. They’d already climbed 41 per cent year to date, even as the wider S&P 500 index is nearly flat year to date.

The pandemic has been a boon for top pizza chains this spring as consumers avoided public spaces and instead opted for delivery and curbside pickup.

That gave a boost to Domino’s, which was already outpacing rivals before the virus given its commitment to tech-enabled carry-out and delivery. In June, the pizza company leaned harder into its convenience model, rolling out both a pizza registry for postponed or scaled-back weddings and contactless carside pick-up at its stores.

Outside of the U.S., the quarter showed some cracks. In international markets, same-store sales rose just 1.3 per cent, excluding the impact of currency, slower than last year’s pace. At its peak, about 2,400 of the company’s international locations were temporarily closed in the quarter due to the virus; that number has since fallen to fewer than 600.

Domino’s also said Thursday that Jeffrey Lawrence, its chief financial officer, will retire after more than two decades with the company. He has agreed to stay on as CFO until the company names his successor.