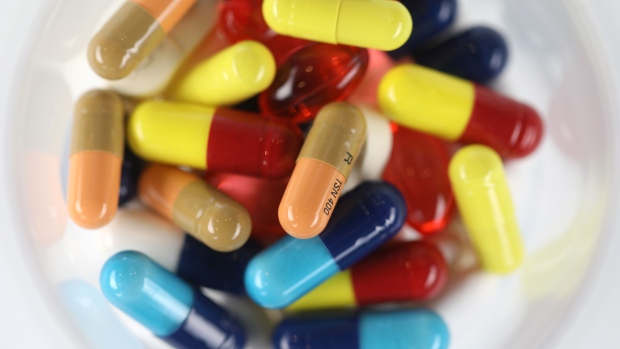 Brightly coloured pharmaceutical medication, including antibiotics, paracetamol, Ibuprofen and cold relief tablets, manufactured by a variety of companies sit in this arranged photograph in London, U.K., on Friday, April 27, 2018. Pharmaceutical companies may see approval times cut to 14 months vs. 19 and about $370 million of sales brought forward per antibiotic after global regulators aligned rules to combat bacterial resistance. , Bloomberg

People can continue using ibuprofen and its class of painkillers, known as non-steroidal anti-inflammatory medicines, following the package instructions, the European Medicines Agency said Wednesday, joining the growing cacophony over whether paracetamol is a safer choice for those with the new virus.

The regulator weighed in after French Health Minister Olivier Veran on Saturday said that patients with Covid-19 should avoid anti-inflammatory drugs like ibuprofen and rely on paracetamol -- otherwise known as acetaminophen, the main ingredient in Tylenol -- instead. Veran’s tweet set off a firestorm on social media and led to a run on paracetamol in some pharmacies.

A letter published in the medical journal The Lancet this month posited a link between medicines that can boost levels of an enzyme called ACE2, including ibuprofen, and severe cases of Covid-19. The enzyme is increased in people with diabetes and those receiving some treatments for hypertension. The letter was pure hypothesis, however, and suggested doctors should monitor patients.

“There is currently no scientific evidence establishing a link between ibuprofen and worsening of Covid-19,” the EMA said. Following the leaflet instructions means using as little as possible for the shortest possible amount of time.

The agency already started a review of ibuprofen and another NSAID, ketoprofen, last May after the French National Agency for Medicines and Health Products Safety suggested they could worsen infections including chickenpox. The medicines’ anti-inflammatory effects might hide the symptoms of an infection getting worse, the agency said. Hiding symptoms is a separate issue from the hypothetical link suggested in the Lancet letter, and paracetamol also has a fever-reducing effect.

In the absence of a more conclusive expert review, patients should reach for paracetamol if they have it, French news agency Agence France Presse quoted a World Health Organization spokesman as saying. AFP quoted the spokesman as saying people shouldn’t use ibuprofen to self-medicate. The WHO didn’t immediately return a request for comment.