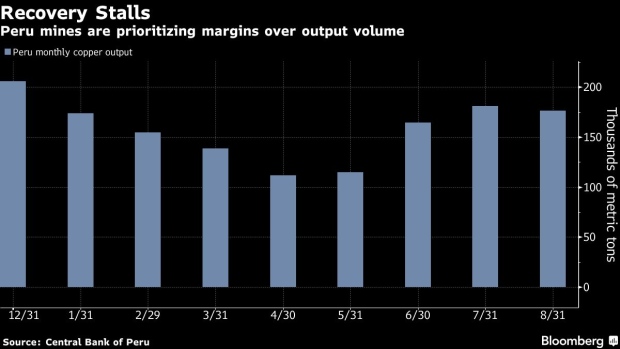 (Bloomberg) -- Peru, the biggest copper-producing nation after Chile, bounced back from hard lockdowns to post double-digit output growth mid year. The next stage of its recovery is proving slower.

Mines have invested in social distancing measures to keep workers safe and are now focusing on defending margins rather than just lifting production, said Victor Gobitz, president of Peru’s Institute of Mining Engineers.

“It’s going to take some time to get back to last year’s levels,” Gobitz said in a telephone interview Tuesday, adding that for some operations that won’t happen until next year. “The priority isn’t to produce more, it’s to become more financially robust.”

While production in neighboring Chile has remained fairly stable during the pandemic, most of Peru’s mining industry closed for two months, depriving Chinese smelters of concentrates and pushing up treatment charges, before bouncing back sharply in June and July. Since then, gains have been more subdued and slower output growth will continue, said Gobitz, who also heads Antamina, one of Peru’s biggest copper mines.

Still, the industry has managed to keep Covid-19 infections to a minimum and mines are operating without any impact from political turmoil in the country, he said. After reducing workforces earlier in the year, some companies are back to 90% staffing levels, Gobitz said.

A wild week in Peruvian politics has seen three different presidents in power. While that has had an indirect impact on mining via market reactions, the industry has been producing and shipping mineral without any disruptions from protests, which have been centered in urban areas, he said.

Given mining in Peru is supported by rich deposits, plentiful energy, modern regulations and a healthy project pipeline, the industry is well positioned to push through political noise that’s the result of some institutions not maturing, he said.