Markets 'have priced in too much optimism versus reality': FX strategist

Take a gander at a chart of the S&P 500 Index and it sure looks like traders expect the coronavirus crisis to end quickly and the economy to roar back. One might think that the only thing to wait for is an all-clear signal — a cue that marks the conclusion to the COVID-19 calamity and the return of the boom times.

But it isn’t likely to work that way, according to comments that company officials have made on recent earnings calls. Executives bold enough to give any guidance whatsoever have been far more likely to predict a long slog ahead than the V-shaped recovery so many stock buyers are betting on, according to research by RBC Capital Markets.

“Their commentary suggests investors need to prepare for a long, slow and uneven recovery,” Lori Calvasina, the head of U.S. equity strategy at RBC, wrote in a report this week. “That isn’t currently priced into the stock market.”

After studying corporate results and commentary from the first half of the earnings season, Calvasina’s team says analyst forecasts for earnings growth are still too optimistic. More downward revisions are in store, and that could create choppy trading conditions in equities markets going forward, according to RBC. 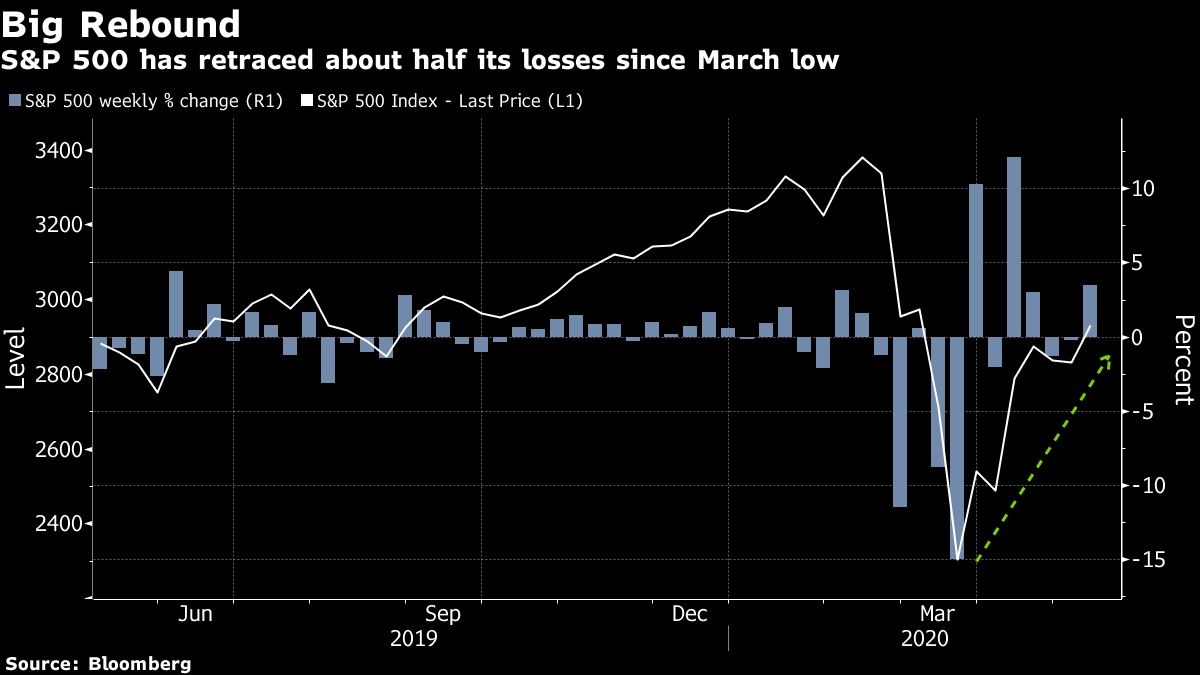 The reason for the pessimism should be obvious as people across the U.S. hunker down at home in an effort to avoid a vicious virus that’s already produced more than 1.2 million confirmed infections and 75,000 deaths. A growing consensus of public-health officials predict it will be at least 18 months until there’s a vaccine. Before one arrives, there isn’t much chance we’ll bring back the status quo.

“There is not going to be a flip of the switch and everything returns to normal,” said Michael Reynolds, investment strategy officer at Glenmede, which manages US$40 billion of assets for clients. “There are so many layers to this. We threw our V-shaped projection out the window about a month ago.”

The downbeat take meshes with a lot of what’s been heard on earnings calls this quarter. Ecolab Inc.’s chief executive officer told analysts “there’s a lot that we don’t understand yet.” The top official at CoStar Group Inc. conceded “we don’t know if we’re going to be fully back at work, when, how.”

Historically, the stock market’s path back to all-time highs is often long and harrowing. UBS Global Wealth Management says it’s taken an average of 39 months to go from a bull market peak to setting another all-time high.

And yet amid the belief that a panacea is soon to arrive, the S&P 500 is in the midst of an astonishing run, with one of the speediest recoveries on record over the past few weeks. Since the March low, the index has gained more than 30 per cent, retracing more than half its coronavirus-crash losses. April was the best month for stocks in more than three decades.

The way stock investors are allocating also shows that fairly soon they’re expecting a distinguishable event that marks the end of the crisis, says Dennis DeBusschere, a strategist at Evercore ISI. He cites the fact that equity buyers coming back into the market seem to be targeting specific sectors, like tech, instead of a broader stock allocation.

The idea that investors are awaiting a catalyst is “consistent with dispersion in the index,” he said.

For now, investors seem to be encouraged by early efforts to reopen some state economies, even though 10 states that have lifted restrictions don’t meet the White House guidelines for reopening, according to a Bloomberg analysis.

“If we start to see these re-openings not go well, it will be a serious volatility event,” said Shawn Cruz, senior manager of trader strategy at TD Ameritrade.

Even if the economy rebounds quickly, a post-Covid world might look very different from the one the virus devastated. Many economists project a reworking of existing business models or changes in consumer behavior -- everything from a sharp drop-off in restaurant visits to higher savings rates.

Of course there’s always optimists, and some companies are expecting the virus-induced shock to be short-lived. Hasbro Inc. and JB Hunt Transport Services Inc., among others, fall into that category, according to comments from their executives.

In general, that view reflects the gradual rebound seen in China — where much of the country has opened up again after the outbreak — and tentative stabilization in other regions, according to Binky Chadha, chief global strategist at Deutsche Bank.

To Cruz at TD Ameritrade, it seems like investors are putting a lot of faith in the Federal Reserve to keep markets operating smoothly and the U.S. government to restart the economy. But he points out that so much depends on factors that are hard to predict, like whether people will continue to abide by social distancing recommendations.

“Markets are incredibly optimistic, they feel like everything that’s been done right now from the government, from the Fed is putting the economy in a place to bounce back — and have a pretty strong bounce-back,” Cruz said. “But that’s certainly a risk.”