Reverse mortgages on the rise in Canada

If you’re 55 or older, you can borrow as much as 55 per cent of the value of your home. Principal and compound interest don’t have to be paid back until you sell the home or die. To keep the loan in good standing, homeowners only need to pay property tax and insurance, and maintain the home in good repair.

“We’ve only been in this market for 18 months, but applications are jumping,” and have tripled over the past year, Andrew Moor, chief executive officer at Equitable Group Inc., said in an interview. The company, which operates Equitable Bank, sees the reverse mortgage sector expanding by about 25 per cent a year. “Canadians are getting older and there is an opportunity there.”

Outstanding balances on reverse mortgages have more than doubled in less than four years to $3.12 billion, excluding foreign currency amounts, according to June data from the country’s banking regulator. Although they represent less than one percentage point of the $1.2 trillion of residential mortgages issued by chartered banks, they’re growing at a much faster pace. Reverse mortgages rose 22 per cent in June from the same month a year earlier, versus 4.8 per cent for the total market.

The fact that these niche products are growing so quickly offers a glimpse into how some seniors are becoming part of Canada’s new debt reality. After a decades-long housing boom, the nation has the highest household debt load in the Group of Seven, one reason Bank of Canada Governor Stephen Poloz may be reluctant to join the global monetary-policy easing trend. 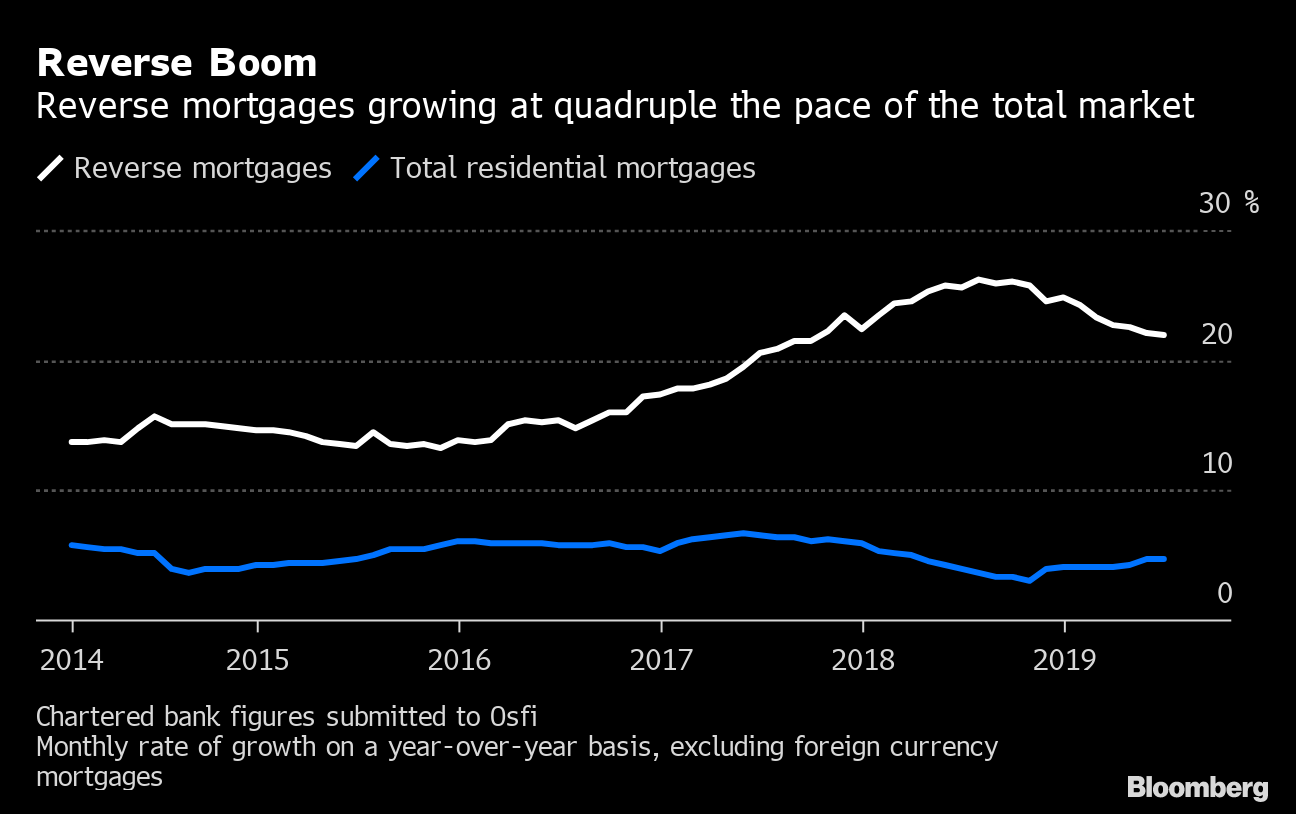 More seniors are entering retirement with debt and the cost of rent has shot up in many cities, making downsizing difficult amid hot real estate markets. Reverse mortgages offer a new source of income.

Canada’s big five banks have so far shied away from the product. Only two lenders offer them in Canada. HomeEquity Bank, whose reverse mortgage has been on the market for 30 years, dominates the space with $3.11 billion on its books. Equitable Bank, a relatively new player, has C$10.1 million. Shares in parent Equitable Group have surged 75 per cent to a record this year.

Critics say reverse mortgages are a high-cost solution that should only be used as a last resort.

“When they think of their cash flow, they’re not going to get kicked out of their house, but in reality, it really has the ability to erode the asset of the borrower,” Shawn Stillman, a broker at Mortgage Outlet, said by phone from Toronto.

Atul Chandra, chief financial officer at HomeEquity Bank, said the higher rates are justified because the lender doesn’t receive any payments over the course of the loan.

“Our time horizon for getting the cash is much longer, and generally the longer you wait for your cash to come back to you, the more you need to charge,” Chandra said in a telephone interview.

Executives at HomeEquity Bank and Equitable say they are focusing on educating people about reverse mortgages to avoid mistakes that were made in the U.S. during the housing crisis -- including aggressive sales tactics.

While delinquency rates on regular mortgages are still low for seniors, they were the highest among all age groups in the first quarter, at 0.36 per cent, according to data from the federal housing agency. The 65-plus demographic took over as the most delinquent group at the end of 2015. For non-mortgage debt, delinquency rates in the 65-plus category have seen the biggest increases over the past several quarters, Equifax data show. 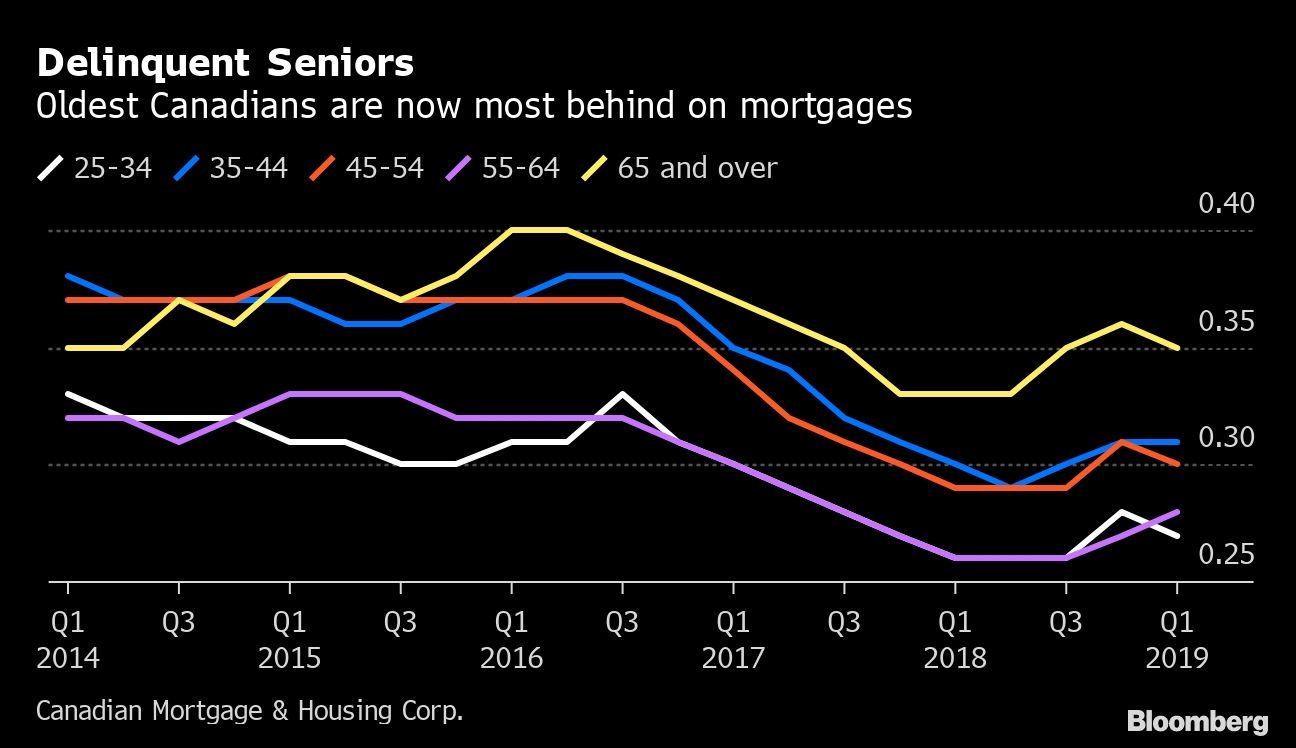 Reverse mortgages aren’t included in typical delinquency rate measures -- borrowers can’t be late on payments because there are no payments -- but they can be in default if they fail to pay taxes or insurance, or let the home fall into disrepair. However default rates for reverse mortgages have remained stable, even with the strong growth in volumes, said HomeEquity’s Chandra.

According to a scenario provided by HomeEquity Bank, a borrower who took out a reverse mortgage of $150,000 at an interest rate of 5.74 per cent would owe $199,058 five years later. A home worth $750,000 when the reverse mortgage was taken out would be worth $869,456 five years later, assuming three per cent annual home price appreciation, meaning total equity would have grown by about $70,000.