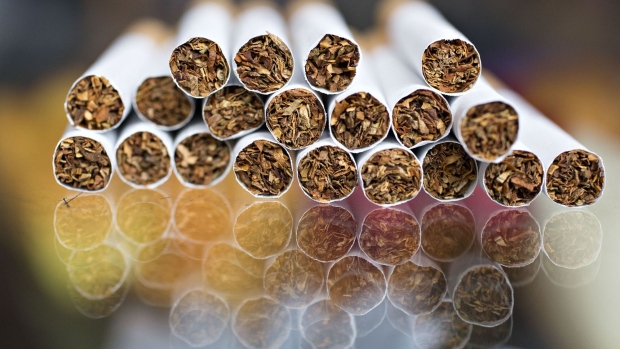 (Bloomberg) -- Just before midnight on a hot August evening in 2017, two police officers in an unmarked car in northern Greece’s largest city, Thessaloniki, stopped a truck for what looked like a routine check.

In the back of the truck, the two officers and the 15 others who joined them found piles of counterfeit cigarettes, leading to one of the biggest hauls of fake smokes in Greece. The search was the culmination of an eight-month-long surveillance of an illegal cigarette factory near Athens and a carefully laid dragnet involving more than 80 police personnel working practically around the clock. The authorities seized 178 million counterfeit cigarettes and more than 18,000 rolling tobacco packs.

Efforts to nab counterfeiters have accelerated, with police now targeting products that go into the manufacturing of such contraband. This month, they seized 128 metric tons of tobacco from a warehouse in Viotia, north of Athens, that would have produced some 604 million counterfeit cigarettes.

The proliferation of fake versions of well-known labels from Marlboro and Muratti to Business Royals that often use inferior tobacco leaves and can be bought on street corners for as little as 1.50 euros ($1.66) a pack — less than half the price of the real thing — has made Greece the counterfeit-cigarette capital of the European Union. In 2018, Greece lost 700 million euros from the illicit trade in cigarettes and tobacco, according to a KPMG report, an amount that could have helped the country avoid a number of pension cuts during its three international bailout programs. Pensioners were asked to take a 740 million-euro hit last year to bolster the country’s social security system.

As Greece’s new Prime Minister, Kyriakos Mitsotakis, seeks to make good on his campaign promise to ease the country’s tax burden,  cracking down on such illicit activities is becoming critical. Plugging tax leakages will give him the fiscal space he needs to lure investors with lower levies and also reverse some of the austerity measures introduced during the crisis. The 51-year-old leader is trying to show that his government can overhaul the economy and rid it of corruption, red tape and tax dodging.

“The fight against tax evasion is not only the protection of healthy business but also the defense of social justice,” Finance Minister Christos Staikouras said this month.

Greece has one of the highest rates of smoking in the world, and a pack of cigarettes in the country is among the cheapest in the EU. Yet nearly a quarter of all cigarettes smoked in Greece in 2018 were counterfeit, according to the KPMG report. Until 2015, the country was an import destination for fake-label cigarettes, with packs arriving by sea or road. A sharp increase in the duty on tobacco products during Greece’s crisis damped those inflows and brought the illicit production onshore. The number of legally sold cigarettes in Greece fell to 16.7 billion in 2018, almost half that in 2009, according to KPMG. Over the same period, the share of illegal cigarettes rose to 23.6% of all smokes sold from 3%.  People operating these businesses have also been emboldened to export their fake cigarettes to countries such as Bulgaria, Italy, Romania, Spain and the U.K.

In recent years, nine factories have been identified in the Athens area for producing counterfeit cigarettes. Such operations are also rampant in other areas of Greece, including Thessaloniki. The illicit trade of tobacco and cigarettes has a huge social and economic cost, said Christos Harpantidis, chairman and chief executive officer of Papastratos, the Greek unit of Philip Morris International Inc.“We all know that proceeds from illegal cigarettes are used to finance international crime rings, ” he said.

In the Athens area, much of the illicit production is concentrated in Aspropyrgos, an industrial suburb west of the capital that’s full of factories — some of them abandoned — forming a maze of narrow streets and dead ends.

The Greek and Italian criminals involved in the 2017 haul had picked a location in Aspropyrgos because it’s difficult for law enforcement agencies to enter the area without being noticed, said a police officer involved in the surveillance. To monitor the factory,  the police transformed the terrace of a local hospital into an observation platform, even using drones. When they had finally gathered enough information, they organized the raids, halting the truck outside Thessaloniki while also breaking into the plant.

In this month’s raid, the anti-organized-crime unit of the Crete regional police said after many months of surveillance, it arrested four Greeks and a foreigner for the illegal production, distribution and export of contraband tobacco products.Producers of counterfeit cigarettes invest about 1 million euros to set up a plant, and recoup 10 times that amount within six months. With such huge returns on investment, the police don’t doubt that more such operations will be mushrooming and they’ll be constantly playing whack-a-mole.

To contact the editor responsible for this story: Sotiris Nikas at snikas@bloomberg.net, Vidya N Root