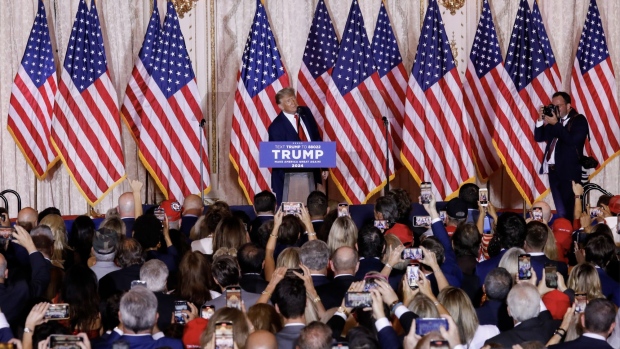 Trump raised $4.2 million from donors using the GOP’s online platform WinRed in the two weeks after his Nov. 15 announcement, an underwhelming sum for a critical period. It’s only a slight increase from what he had raised in prior weeks and a far cry from his typical fundraising prowess. Moreover, deep-pocketed Wall Street donors have signaled publicly that they won’t support him.

He hasn’t held a big campaign event since declaring his run, making only a few brief public appearances, and has faced backlash within his party for dining with the antisemitic rapper formerly known as Kanye West and White nationalist Nick Fuentes at his Mar-a-Lago resort. Most recently, Trump raised eyebrows by suggesting the US Constitution be terminated to re-install him after his 2020 loss.

It’s all added to the gloom surrounding Trump as he gets blamed for the GOP’s disappointing midterm election — potentially costing the party Senate control and a larger House majority — and stares down criminal legal jeopardy.

“There’s no question that other candidates smell blood in the water, between Trump getting blamed for the midterm results, a less-than-inspiring announcement, and then a huge display of misjudgment shortly thereafter,” said Republican strategist Alex Conant, a veteran of presidential campaigns including Florida Senator Marco Rubio’s 2016 White House bid.

Republican leaders who previously avoided criticizing Trump for fear of angering his base of supporters now seem emboldened, with the Senate’s No. 2 Republican, John Thune, calling him “an albatross and a real liability” for the party. And potential 2024 candidates including former New Jersey Governor Chris Christie and Maryland Governor Larry Hogan have called on the GOP to move on from Trump.

Trump’s strategy is by design and is focused on building out the operation and putting a foundation in place to wage an overwhelming campaign, spokesman Steven Cheung said. The campaign is assembling teams in early voting states and making sure it is positioned to win, not letting the media dictate how it operates, he said.

“This is a marathon and our game plan is being implemented even though the presidential calendar hasn’t been set yet and the 2022 midterm cycle just ended,” Cheung said in a statement. Trump is “the single most dominant force in politics” and people “should never doubt his ability to win in a decisive and dominant fashion,” he said.

But the campaign has essentially been idling since his Nov. 15 announcement. It spent less than $7,500 on Facebook ads since then, and spent just $115,000 on Google. By comparison, Trump spent a combined $2.2 million on those ads in the first three weeks after his 2020 campaign launched, according to the researcher AdImpact.

The WinRed post-general election report filed Thursday showed that Trump raised an average of $298,000 a day on the day of his announcement and the following 13 days — just $14,800 more than the daily average the previous two weeks. By comparison, Trump raised $130 million through WinRed in the two weeks after the 2020 election.

Save America, Trump’s leadership PAC, reported $20.8 million on hand. The PAC allows him to use the funds for non-campaign expenses such as paying legal bills, which the Republican National Committee stopped paying after he became a declared presidential candidate.

Two of his companies were found guilty of a scheme that allowed executives to evade taxes on Dec. 6, and he faces a raft of other legal perils, including criminal probes of his handling of classified documents. The House Jan. 6 committee is considering criminal referrals against Trump and at least four allies involved in his efforts to overturn the 2020 election.

In the 77 days between losing the 2020 vote and the inauguration of President Joe Biden, Trump raised almost $250 million, an extraordinary sum for a losing presidential candidate. In his fundraising pitches to supporters at the time, he promised to use the money to contest the results of the 2020 election, though most of the money was diverted to Save America.

His fundraising pace has slowed since. He paused the operations for about two months after a mob of his supporters rioted in the US Capitol on Jan. 6, 2021, to stop the counting of Electoral College votes for Biden.

The days after a presidential launch have typically been the biggest fundraising days for those campaigns, so the fact Trump’s announcement wasn’t followed up by activity to capitalize on the enthusiasm and momentum “seems like a misstep,” said Eric Wilson, a Republican digital strategist.

Bryan Lanza, who worked on Trump’s 2016 campaign, said the former president boxed himself into announcing early by signaling before the midterms that he was going to do it, when he thought he would be able to capitalize on sweeping GOP victories and freeze the 2024 field. Other strategists said Trump may also think it will be harder to pursue criminal or civil matters against a declared presidential candidate, possibly dealing a setback to the multiple investigations he faces.

Several Republican mega-donors have already said they won’t be backing Trump in 2024, including Stephen Schwarzman, chief executive officer of Blackstone Inc., and Thomas Peterffy, the founder of Interactive Brokers Group Inc. It’s too soon for many other big donors to choose a candidate with the 2024 race still unclear, said Dan Eberhart, a major GOP donor and chief executive officer of oilfield services company Canary Drilling Services.

Some donors are backing Florida Governor Ron DeSantis, who’s expected to enter the 2024 race after an overwhelming re-election victory in November. His success stood in sharp contrast to the defeat for Herschel Walker, Trump’s hand-picked candidate for the US Senate in Georgia, who lost a run-off race this week to Senator Raphael Warnock to give Democrats solid control of the upper chamber.

While 239 of Trump’s endorsed candidates won their 2022 general-election contests with three races still uncalled, many didn’t have competitive races, 18 were unopposed, and 40 lost, according to a Bloomberg News tally. Those losses include eight candidates in US Senate races and 11 for governor, including in the battleground states of Arizona, Michigan, Pennsylvania and Wisconsin.

“Everybody had this anticipation he’s going to announce,” Christie, the former New Jersey governor, said on ABC’s “This Week” on Dec. 4. “Nothing has happened since then except bad things for Donald Trump.”